The first: Mr and Mrs Leong, with their son Andrew Leong. The family operates two stalls – a fish head noodle and a curry mee stall in a food court, Restoran Only One Point in Bandar Puchong Utama which are the first stalls that accept both bitcoin and ethereum in the country.

Will the value of cryptocurrency keep rising or will the bubble burst?

EVERY morning, two nondescript stalls at a food court deep in Bandar Puchong Utama dish out Malaysian favourites such as curry mee and fish head noodles.

But the stalls which sit next to each other display one stark and novel characteristic. Stuck on their glass panes is a sign that says they accept payment in bitcoin and ethereum, the two leading cryptocurrencies of the world.

Andrew Leong, the 29-year-old son of Mr and Mrs Leong who run the two stalls, is a member of the cryptocurrency community.

“We are the first stall in Malaysia to accept both bitcoin and ethereum as payment,” he proclaims.

A few other outlets in Malaysia, including a nasi kerabu stall in the backwaters of Kelantan and JEQ in the House cafe in Section 17 in Petaling Jaya, have been accepting payment in cryptocurrency, but only limited to bitcoin.

Admittedly, since putting up the payment sign about a month ago, there have only been a handful of customers who have actually paid for their noodles using cryptocurrencies.

“But in five years’ time, we believe everyone will be using cryptocurrencies as payment. So, we want to be there first,” says the business and finance graduate, whose day job is working for an asset management firm. 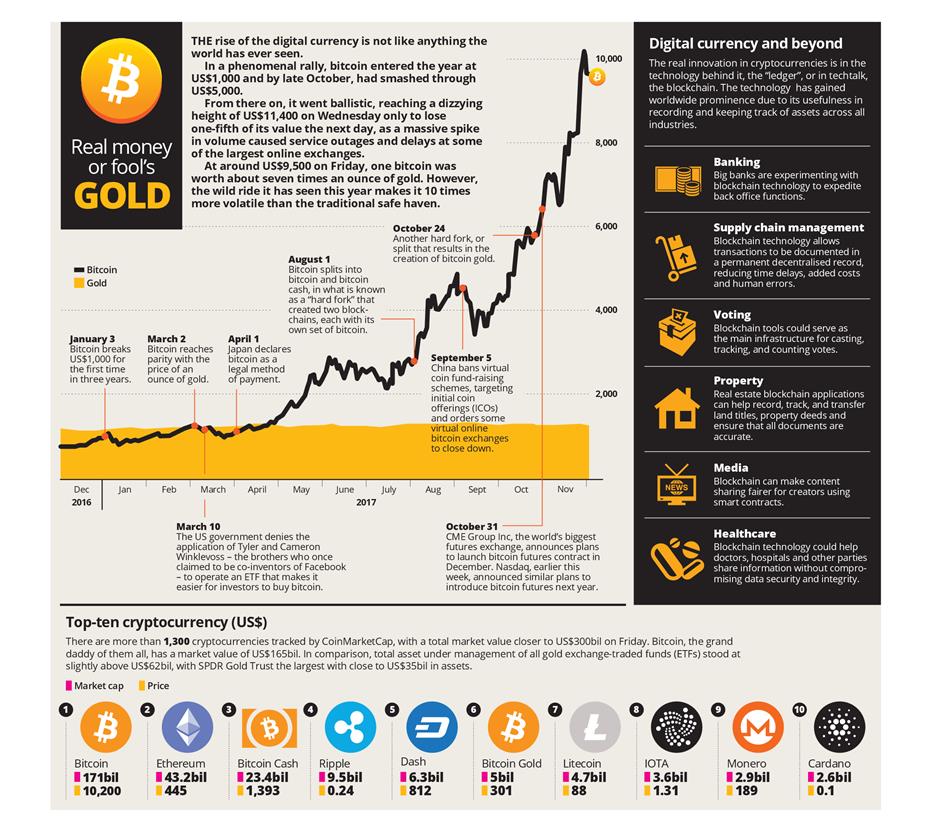 Andrew also runs a cryptocurrency training centre called the 1st Crypto Academy out of Setiawalk in Puchong, where more than 100 locals have signed up for courses that range from the basic understanding of blockchain to how to trade in cryptocurrencies.

But with bitcoin having surpassed the price of US$10,000 (RM40,910) a unit and being labelled as one of the biggest bubbles in the financial world, is there a concern that some Malaysians are investing in it at this price?

Luno, one of the more popular exchanges operating in this part of the world, says it now has one million customers or wallets registered, but does not disclose countrywide statistics on the account holders.

But its exchange does show some interesting statistics. For example, on Thursday alone, Malaysians traded over 900 bitcoin on the Luna exchange, which works out to a total value of some RM40mil. In comparison, Bursa Malaysia’s average daily value of trades ranges between RM2bil and RM3bil.

Still, the figure of RM40mil is based only on one exchange.

Mriganka Pattnaik, the Singapore-based countries associate for South-East Asia for Luno, says that on the first day of the exchange enabling Malaysians to trade ethereum in Malaysia – Nov 9 – 1,414 units of ether were traded. “Within two weeks, we facilitated trades of 2,938 ethereum in Malaysia. That’s a growth of over 100%,” he quips.

The bitcoin euphoria keeps rising. This week, its price surpassed US$10,000, although it cooled down soon after. But also this week, more voices from the traditional financial world joined the chorus of naysayers against the cryptocurrency world. A hedge fund manager, who began investing in bitcoin when it was US$90 apiece, says it is the biggest bubble of our lifetime.

Renowned economist Joseph Stiglitz says the digital currency ought to be outlawed as it does not serve any social purpose. While he claims to still support technological innovation in payments, he reckons digital money should be “fiat created” and controlled by governments. He also seems to think that the US government could one day deem the use of bitcoin as a “circumvention” of existing rules and decide to “nip it in the bud”, which would cause the digital currency’s spectacular crash.

Others do not think this is a possibility.

“No party can ‘outlaw’ bitcoin. It’s like BitTorrent. Unless you shut down the Internet, it’s not going to stop,” says an official from a local government body who spoke on the condition of anonymity.

Noteworthy in the current run-up to bitcoin prices is the presence of hedge funds. CNBC reported in October that there were more than 120 hedge funds focused solely on bitcoin and other digital currencies.

Some argue that it is the hedge funds’ presence that is spiking up cryptocurrencies to the dizzying and possibly dangerous levels.

In the midst of the bitcoin craze, initial coin offerings or ICOs have become all the rage. Besides bitcoin, there are thousands of other cryptocurrencies in the market, with many more coming up every other day, including in the local market. Many regulators are frowning upon these ICOs, as on the face of it, they are an infringement of the strict securities laws that govern fund-raising activity involving the public.

For sober markets like Malaysia and Singapore, the regulators’ stance is clear. They are not outlawing ICOs but making a simple statement: if fund-raising is your main objective, then please take note of existing securities laws, which have been built and refined over a very long time.

Pattnaik of the Luno exchange gives a good rundown of the ICO frenzy going on. He says, “There are lots of scams, incompetent teams, projects that don’t (and shouldn’t) use the particular technology to be successful and over-funding instances. There are some interesting projects that will probably become quite big one day, but they are very few and far between. It is mandatory for consumers to carry out a lot of extensive research, both in terms of the technology and team behind the ICOs, as well as the legal repercussions in their particular geography. Also, it is very important to understand the high risk involved in these investments and stay away from the hype.”

Adds Mike Kayamori, the CEO of Quoine, a cryptocurrency exchange which recently raised US$105mil via its own ICO, “We advise our customers to trade risk capital only and do their own due diligence. Read the company’s whitepaper, research the management team, join and talk to their community to understand the project better (crypto communities are mainly on Telegram or Slack).”

Notably, almost everyone involved in the business of cryptocurrencies has one thing to say: it is not about bitcoin but about its underlying technology, the blockchain.

“Talking about blockchain and its impact on society is a more meaningful discussion. Bitcoin is just speculative and driven by a herd mindset,” he says.

He says NEM’s blockchain technology offers a fundamentally streamlined method of maintaining a secure ledger of transactions compared to a traditional database.

“NEM’s blockchain platform was designed and coded from the ground up for scale and speed and delivers industry-leading transaction rates for internal ledgers.”

Jason Lee, NEM global director of partnerships and strategic alliances, says it is important to understand that the underlying concept behind bitcoin and blockchain is that it is decentralised.

“It is a peer-to-peer ecosystem usually without a centralised intermediary. What we are observing is the advent of a technological change to society and what we should be really thinking about is how we can respond to it.”

Kayamori adds that bitcoin and other cryptocurrencies are practical applications of blockchain technology as a secure payment method or transfer of value. “Blockchain technology automates trust between counterparties and every transaction recorded on the blockchain is immutable, making it tamper-proof. It is a powerful technology that can be applied not just in financial services but across other industries as well, from supply chain management, real estate to fine art to validate inventory value or ownership titles.”

Should you buy bitcoins?

Despite all the negative publicity surrounding bitcoin and cryptocurrencies, many Malaysians are increasingly getting tempted to ride on this outlandish bandwagon. While they fear that chasing bitcoins is a bit risky, their attention has focused on ‘cheaper’ cryptocurrencies such as ethereum.

Suraya Zainudin from ACCESS Blockchain Association Malaysia, a body which supports the application of blockchain technology in industry, gives some good advice.

“My advice is not to go into it if firstly, these investors already have other risky investments. Bitcoin is risky and therefore not a suitable addition to such a person’s portfolio. Note also that cryptocurrencies are susceptible to scams - they are unregulated in many parts of the world and there’s not much victims can do to pursue legal action. Finally, one must have a have high level of digital security knowledge. Aside from scams, it is common to hear of cases where people lose their bitcoins due to hacking and phishing incidences, among others,” she says.

Meanwhile, hardcore believers in bitcoin remain unfazed by all the negative talk. Andrew, who introduced cryptocurrency payment options to his parents’ food stalls in Puchong, is one. “Don’t be surprised if bitcoin reaches the price of US$100,000 in the future, when it is widely accepted as a secure payment method globally,” he quips.