This is the first time the courts have handed down a custodial sentence for insider trading after a trial. The only other person to have been found guilty of insider trading in Malaysia history is Kim Hin Industries Bhd managing director Chua Seng Huat in 2001. He pleaded guilty and fined RM1.2mil or jail of 12 months. He paid the fined.

In a media statement on Friday, the Securities Commission (SC) said that the Kuala Lumpur Sessions Court convicted the former managing director of APL Industries Bhd (APLI) along with former remisier Tiong Kiong Choon on Friday for insider trading offences.

In Thai's case, he is appealing against the conviction.

As for Tiong, he got five years’ jail and a RM10mil fine.

Insider trading offences, under section 188 of the Capital Markets and Services Act 2007 (CMSA), carry a mandatory punishment of imprisonment not exceeding 10 years and a fine of not less than RM1mil.

APLI, a rubber glove maker that was delisted from Bursa Malaysia in February 2009, used to be a 14.09% associate of Supermax. Supermax became its substantial shareholder in February 2005 by acquiring 12.95% equity interest.

Supermax subsequently decided to end its investment in APLI consisting of 49.98 million shares by making a full write-off totalling RM16.69mil. Thai retired from his post as APLI executive chairman and managing director in December 2008.

Thai and Tiong were charged with insider trading in December 2014.

In Friday’s statement, SC said Thai was convicted for communicating non-public information between Oct 25, 2007, and Oct 29, 2007, to Tiong.

Tiong was convicted for two counts of disposing a total of 6,208,500 APLI shares while in possession of the same non-public information via accounts belonging to his mother-in-law and his mother. At the time of the commission of the offence, Tiong was also a licensed intra-day trader with a stock broking company.

According to SC, the non-public information communicated from Thai to Tiong related to the audit adjustments proposed by APLI’s auditors, which resulted in APLI reporting a higher loss for the financial year ended June 30, 2007, as compared to the previously reported unaudited Q4 results for the same financial year, and that APLI would be classified as a PN 17 company.

APLI made announcements to Bursa Malaysia Securities Bhd about the audit adjustments and its classification as a PN 17 company on Oct 31, 2007.

In passing the sentence, Sessions Court judge Tuan Zulqarnain Hassan ruled that a deterrent sentence was warranted as insider trading offences were deemed more serious than conventional crimes, given far reaching effects on investors’ confidence and the public as a whole.

“Insider trading is a modern white-collar economic crime. It is serious and is in a category or class of its own,” said the judge.

In a statement sent on Friday evening, Supermax said it was “business as usual” at  the company and that its management team was committed to delivering good business performance and profitability in the interest of the company and its shareholders.

“Supermax has been delivering consistent profits and dividends to shareholders since its listing on Bursa Malaysia in 2001. In its recent first quarter FY18 results dated Nov 22, 2017, Supermax profit after tax rose 43%. The management is confident of maintaining and improving the company’s performance in the next few quarters ahead,” the company said.

“The position of the business remains intact and the management stands strong in growing the business forward.” 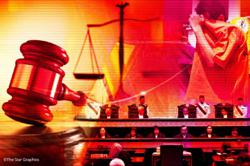