THE prospects for IOI Properties’ (IOIP) property development in Singapore seems to be improving, as private-home prices in the city state increased in the third quarter (Q3) of 2017.

In addition, the group’s joint venture with Hongkong Land International Holdings Ltd for the development of the Central Boulevard site in Singapore is expected to improve the balance sheet of IOIP.

Maintaining its earnings forecasts for IOIP for the financial years (FY) ending June 30, 2018, and 2019, MIDF Research retained its “buy” recommendation on the property development company, with an unchanged target price of RM2.41 based on 40% discount to fully-diluted revalued net asset value.

The brokerage said IOIP had a positive start to FY18, with core net income for Q1’FY18 climbing 8% year-on-year (y-o-y) to RM195.6mil, underpinned by higher contribution from all business divisions.

Local projects contributed 54% to the new sales, the Singapore project contributed 34% while the remaining 12% came from China. 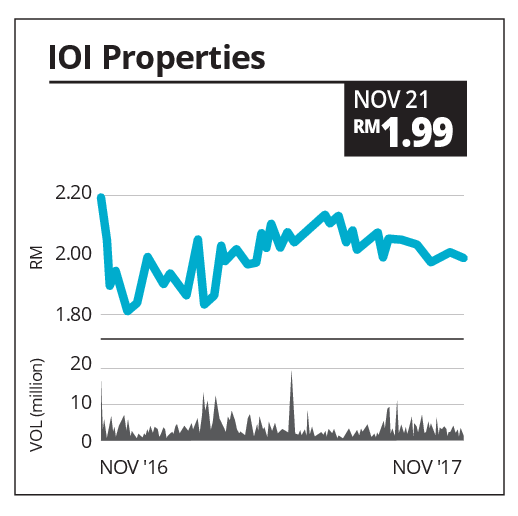 WITH no catalyst in sight, PublicInvest Research maintained its “neutral” call and target price for KKB Engineering pegged at around 0.9 times to book value, which suggest a fair value of 95 sen.

The brokerage pointed out that the reversal of KKB’s losses for the third quarter (Q3) for the financial year ending Dec 31, 2017, could be due to write-backs from its oil and gas businesses as its manufacturing business was still just breaking even.

Hence, PublicInvest Research said it was keeping its earnings for KKB unchanged for now.

According to PublicInvest Research, KKB’s nine-month net loss of RM3.7mil is within its expectations.

The group’s current outstanding orderbook is estimated at RM1.1bil, mainly from the Pan Borneo project, with works progressive until the fourth quarter of 2020.

During the quarter in review, KKB’s revenue rose 78.3% y-o-y to RM49.3mil, mainly from the engineering division which contributed about 92% of total revenue, with the remaining from its manufacturing division.

The revenue increase was attributed to higher billings from the group’s civil construction though offset by weaker revenue from its steel pipes manufacturing business. 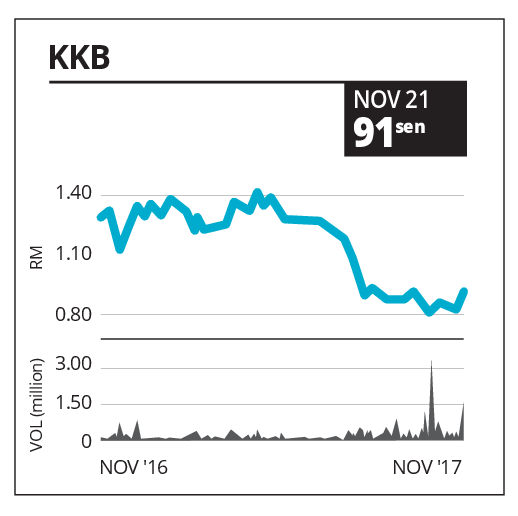 AS the stock valuation of Daibochi remains expensive, CIMB Research maintained its “reduce” call on the packaging company. However, the brokerage has increased its target price for Daibochi to RM1.88 from RM1.48 previously, as it rolls forward to valuation to financial year (FY) ending Dec 31, 2017.

CIMB Research said its new target price for Daibochi was still based on 15.6 times price-earnings ratio, which represented a 20% premium over the sector average in view of Daibochi’s Myanmar joint-venture’s (JV) attractive long-term growth prospects. The brokerage said it maintained its earnings forecasts for Daibochi unchanged.

CIMB Research said it remained long-term positive on Daibochi’s move to Myanmar, noting the company had the first-mover advantage in the country.

“Myanmar currently does not have many multinational companies (MNCs) but we believe it would only be a matter of time before more MNCs set up operations in Myanmar. Daibochi has been working with major MNCs in the region and as such, we believe the Daibochi JV has a strong chance of getting the MNC business in Myanmar,” CIMB Research said.

Daibochi’s 60%-owned Myanmar JV started operations in Q3’FY17 and the JV recorded RM6.5mil revenue and RM1.95mil pre-tax profit, accounting for 19% of the group’s total pre-tax profit, during the quarter.

Notably, Daibochi’s Myanmar pre-tax profit margin was 29%, compared to only 9% for its Malaysia operations. The higher margin allowed the company to do the lower-margin business in Malaysia, which Daibochi did not want to do in the past.

The company revised its dividend policy to exclude Myanmar JV earnings – it will now pay at least 60% of its net profit excluding Myanmar JV operations.

CIMB Research pointed out that Daibochi’s nine-month net profit, which represented 64% of the total estimate for FY17, remained in line with consensus and the brokerage’s expectations. 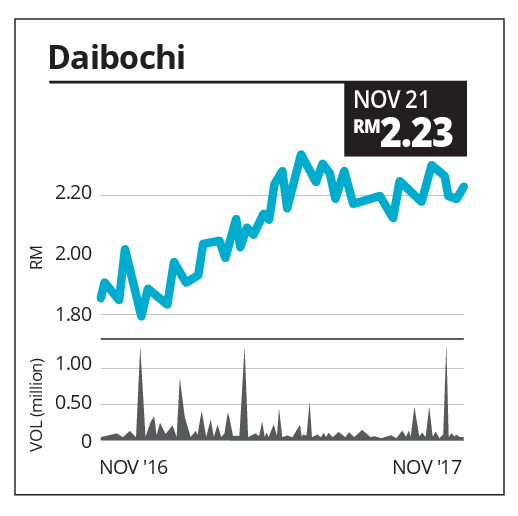 The brokerage maintained its “hold” recommendation on Hap Seng for its expected above-plantation-sector average dividend yield of 4.3%.

As such, the target price for Hap Seng is lowered based on an unchanged 15 times the estimated earnings for FY18.

On a cumulative basis, Hap Seng’s 9M17 revenue increased by 4.3% year-on-year (y-o-y) to RM391.2mil, while pre-tax profit increased 10.9% y-o-y to RM119.5mil. The increase in revenue was largely underpinned by higher average selling prices for CPO and PK, but partially offset by lower FFB production.

For the period in review, Hap Seng’s Ebitda (earnings before interest, tax, depreciation and amortisation) margin in 9M17 improved to 35.6% from 34% in 9M16, attributable to the higher CPO and PK prices.

After excluding one-off items, Hap Seng’s 9M17 core net profit was up by 10.7% yoy to RM88.1mil, accounting for about 64% of Affin Hwang’s previous 2017 forecast and 63% of the street’s 2017 forecasts. The variance was mainly due to lower-than-expected FFB and CPO production. 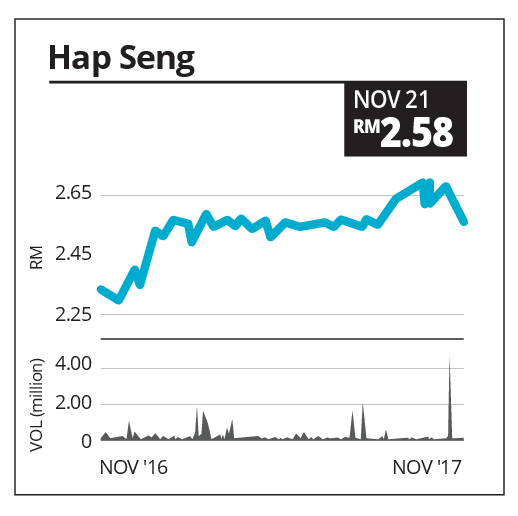