through checks: Azmi say Prasarana has checked the specifications, the submissions, and it is sure that what has been offered is of value.

KUALA LUMPUR: Prasarana Malaysia Bhd has defended the award of the LRT3 rolling stock to a consortium formed by CRRC Zhuzhou Locomotive Co Ltd, Siemens Ltd China and Tegap Dinamik Sdn Bhd, despite it being the sole bidder to supply the train sets valued at RM1.56bil.

Prasarana CEO Datuk Seri Azmi Abdul Aziz said all the due process was observed during the procurement process that showed promise when five companies pre-qualified for the tender in May 2016.

However, when the tender closed in November 2016, only the CRRC-Siemens-Tegap Dinamik consortium put in a bid.

The supply and commissioning of the rolling stock is one of the largest systems work packages offered by the LRT3 project that spans 37km from Bandar Utama to Johan Setia, Klang, while providing 26 LRT stations.

“The evaluation was done according to established tender processes. We have checked the specifications, the submissions, and we are sure that what has been offered is of value to the project,” said Azmi at the signing ceremony here yesterday.

“A tender is not necessarily about comparisons. A tender is about the observance of process, and we have identified those who should participate. Everything is done according to procedure,” said Azmi.

While it is widely believed that the other four potential bidders decided that they could not match CRRC when it came to pricing, a senior Prasarana official who declined to be named argued that it is not always a case of the “cheapest supplier wins”.

“For example, the signalling job did not go to the lowest bidder,” he said, while adding that calling another tender for the rolling stock could also result in the same outcome, and delay the project.

In his speech at the event, Prasarana chairman Tan Sri Ismail Adam said the government had set Aug 31, 2020 as the deadline for the completion of LRT3.

“I am wondering whether we can open three weeks earlier as we saw that the Sungai Buloh-Kajang MRT line managed to open two weeks earlier than the deadline,” he said in jest. 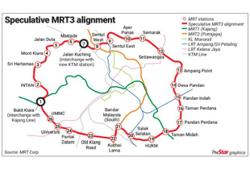