PETALING JAYA: As a China state-owned enterprise (SOE) issued its first ringgit sukuk in the domestic bond market, many are wondering if other China companies that have bagged infrastructure projects would be doing the same.

A week ago, the Malaysian sukuk market saw the debut of the largest ringgit-denominated sukuk by a China-owned company to-date.

Proceeds from the sukuk issuance are expected to partly finance the refurbishment and upgrading of the Bukit Sah water treatment plant. BEWG has been awarded the role of design and build contractor by the state government of Terengganu.

The sukuk issuance also marks the first ringgit-denominated sukuk by a China state-owned company for water infrastructure funding in Malaysia. The sukuk carries a rating of AAIS, with a stable outlook, by Malaysian Rating Corp Bhd.

Even with BEWG issuing the maiden sukuk by an SOE, the demand from China-related companies in the domestic sukuk market remains lacklustre even as more Chinese players undertake projects and contracts in Malaysia.

Despite the strong participation by Chinese players in many Malaysian projects in recent times, especially infrastructure-related projects, only a small number of them have tapped the sukuk market for financing.

The sukuk issuance by BEWG was the first after a lull of nearly two years by a China company.

China-based property company Country Garden Holdings Company Ltd was the first Chinese entity to issue a sukuk in Malaysia, some two years ago.

Country Garden Holdings is the developer of the Forest City project, which covers 14 square kilometres of land on four artificial islands near the border of Singapore and Malaysia.

According to analysts, China-based entities do not prefer to tap into the domestic sukuk market, as they are backed by strong financing sources from their home country.

In a reply to StarBiz, Maybank Investment Bank Research analyst Winsoon Phoon noted that most China-based players did not approach sukuk as a financing option, as funding for their projects are provided mainly by their parent companies.

“Many Chinese companies with a project here in Malaysia are funded through capital injections from their parent companies. In addition, I believe that for those with a need to tap into ringgit-denominated funding, they would prefer bank loans.

“From the companies’ perspective, they may have other sources of funding. So, it is not necessary for them to tap the sukuk market.

“Also, in the domestic ringgit bond market, foreign issuances, more often than not, are priced at a premium compared with similarly-rated Malaysian credits, and because of local bond investors’ aversion to China-related risks, yields on ringgit-denominated bonds by Chinese issuers are priced wider,” he said.

Moving forward, Phoon added that he did not foresee more Chinese companies in Malaysia pursuing sukuk as an financing option in the near term.

Malaysia is the world’s largest sukuk issuer, commanding 42% of the global market share in 2016, with an issuance value of US$72bil.

According to the Securities Commission, as at end-2016, the total sukuk outstanding value stood at RM393.45bil.

Another analyst said the domestic sukuk market consists of primarily local players, as foreign entities are more interested in other funding sources.

“Our sukuk market has mainly local players, as Chinese companies are more inclined towards bank lending.

“The impact of Chinese companies on the sukuk is limited and this could be due to the nature of their projects here in Malaysia,” he said.

BEWG chief executive officer Datuk Vence Ong Kian Min noted that the RM687mil project is expected to be completed in 2018.

“The issuance has enabled the Beijing Enterprises group to diversify its funding sources in Malaysia, which had so far been limited to bank loans,” said Ong after the sukuk issuance signing ceremony yesterday.

Commenting on the oversubscription of BEWG’s RM400mil sukuk issuance, CIMB Investment Bank Bhd chief executive officer Datuk Kong Sooi Lin said that this was testament to the receptiveness of the local market in welcoming foreign issuers. 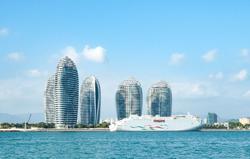