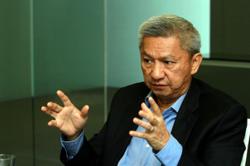 KUAN derives his wealth from flagship Hartalega Holdings Bhd where he is executive chairman.

A self-made tycoon, Kuan founded the company in the early 1980s and was instrumental in growing it to become the world’s largest manufacturer and distributor of nitrile gloves.

It has infrastructure built to support the production of 22 billion gloves per year and exports to 40 countries.

Glove makers, including Hartalega, staged multiple rallies in 2015 on the back of the strengthening of the US dollar against the ringgit.

However, a sharp reversal in the exchange rate ensued last year, resulting in the easing of their share prices.

Correspondingly, Kuan’s estimated wealth comes in lower at RM4.44bil from RM5.37bil a year before – moving him one notch lower to No. 11 on the list.

At 70, Kuan still plays an integral role in the company, but has passed some day-to-day running of the business to his two sons.

Hartalega is ramming up its capacity, albeit at a moderate pace, via its next-generation integrated glove manufacturing complex at Sepang.

According to analysts, Hartalega is expected to see volume output at a 17% compounded annual growth rate in FY17-FY19 at an assumed 85% utilisation rate based on management’s capacity guidance.

The plan is to increase capacity to 42 billion gloves yearly by 2020. Even so, the company’s net gearing has remained relatively low at around 10%, underlining its prudence in maintaining a strong balance sheet whilst in the midst of its expansion plans.

CHEAH, 71, the founder and executive chairman of the Sunway group, wrapped up last year by strengthening the group’s presence in Singapore.

At a time when the property sector is slowing down in the region, the group’s move to replenish its landbank portfolio across the causeway is seen positively, given that its ongoing projects in Novena and Mount Sophia will be completed in about two years.

Recall that in September last year, Sunway and its joint venture (JV) partners won a tender to buy a piece of 5.2 acres of leasehold land at Anchorvale Lane, Sengkang, for S$240.95mil (RM724.14mil).

The Sunway Group’s entities comprise flagship Sunway Bhd, which is among the top-five largest property stocks on Bursa Malaysia with a market capitalisation of RM6.25bil as of Dec 31, 2016. Cheah controls 60% of the flagship entity.

, which was listed in 2015 and is the largest listed pure play construction company by revenue, while Sunway Real Estate Investment Trust

, a 37.3%-owned associate, has a coveted portfolio of growing assets.

All three companies had a combined market capitalisation of RM13.51bil as of year-end.

This year is looking to be a busy one with RM2bil worth of launches planned in several regions, namely, South Quay, Kelana Jaya, Penang, Johor and China.

As for sales, it is targetting RM1.1bil for financial year 2017.

Cheah is seen as a pioneer of higher education and is active in promoting education as a social cause in the country. In 2009, he set up the Tan Sri Jeffrey Cheah Foundation, and gifted to it the privately held and cash-rich Sunway education arm.

His daughter Sarena Cheah is the group’s property division managing director for Malaysia and Singapore.

KLK had initially approached MP Evans’ board with an offer price of 640 pence, but later sweetened the offer to 740 pence, a 74% premium to MP Evans’ closing price on Oct 24.

KLK had seen strategic merit in synergising the operations of MP Evans with KLK’s from a geographical and capabilities perspective. While the plantation group has the balance sheet strength to up the offer, not doing so at a time when the ringgit is weak is seen as the right thing to do.

However, KLK is not completely out of the game to take over MP Evans, as should there be a firm offer from a third party for MP Evans, the former has the right to make another go for it.

For now, it is business as usual for the Lee brothers, who are more known for their interest in KLK than its parent company, Batu Kawan Bhd. The sons of the late founder, Tan Sri Lee Loy Seng, control 50.3% of Batu Kawan, which, in turn, owns 46.6% of KLK.

Batu Kawan’s biggest investment is in KLK and it is often seen as a cheaper proxy to KLK.

Batu Kawan’s stake in KLK is worth almost RM11.94bil, which in itself is worth more than its own market capitalisation of RM8.02bil.

The wealth of the duo was up by some 10% to RM4.06bil, following gains in the shares of Batu Kawan that rose about 5% on higher palm oil prices in 2016.

PRESS Metal Bhd’s Poh Keong and his family saw the biggest rise in fortunes in 2016 when shares of the aluminium producer more than doubled.

The family is the controlling shareholder of Press Metal.

The 56-year-old group chief executive officer has been one of the corporate sector’s rising stars.

A graduate in electrical engineering from the University of Oklahoma in the United States, Poh Keong formed the company as an aluminum-extruding operation in 1986. In a short span of time, it grew to become the largest aluminium smelter in the region and probably one with the lowest operating cost.

Economies-of-scale, coupled with a low-cost operating model, has helped the company to stay in the black even when commodity prices came under pressure.

There were challenges along the way. In 2013, Press Metal’s first aluminium smelting plant in Mukah,Sarawak, almost came to a complete shutdown due to a state-wide blackout that damaged its smelting pots.

During that year, it provided an estimated RM90mil for both operating losses and assets written off arising from the damage done to its Mukah plant.

Still, it managed to report a profit of RM11.57mil for its financial year 2013 (FY13), although it was a drastic drop from previously.

In 2011, the company kick-started the development of its phase two aluminium smelter in Samalaju Industrial Park, Bintulu, Sarawak.

And in June last year, it completed the phase three expansion of its smelter plant in Samalaju, Sarawak, that has increased its overall annual capacity by 35% and 40% to 760,000 tonnes.

With the full commissioning of its new smelter at Samalaju, Press Metal is expected to continue improving its net margins in FY16-17E to 6.2%-7.3% from 5.4% in FY15.

There is further room for margin expansion in 2017, say some analysts in view of the greenback’s appreciation, rising operational efficiency due to better full-year utilisation, and increased volume of higher-margin aluminium alloy products.

For the nine months ended Sept 30, it made a net profit of RM363.67mil, a whopping rise from RM97.37mil registered in the same period before.

Last year, aluminium prices recovered strongly by 16% to US$1,733 a tonne.

Poh Keong has four other siblings sitting on the company’s board and involved in the running of the company.

One of them, Datuk Koon Poh Tat, 58, is the co-founder of Press Metal.

FORMER mathematics lecturer-turned-entrepreneur Chia, 67, is upping the game for QL Resources Bhd with a foray into the consumer market. In April last year, QL Resources announced its tie-up with Japan’s FamilyMart convenience store chain as part of a “long-term investment” to expand its food business amid regional economic integration.

The agro-food major is now the master franchisee of FamilyMart in Malaysia for the next 20 years and plans to build 60 stores annually between now and 2021, To date, QL Resources has opened two FamilyMart convenience store outlets in Wisma Lim Foo Yong, Kuala Lumpur, and Mid Valley City, with two more scheduled for opening in Taman Tun Dr Ismail and KLIA2.

Management has guided that each store has a capital expenditure requirement of RM250,000-RM350,000 and it has earmarked up to RM20mil a year for store expansion.

The company looks to differentiate itself from its peers by focusing on ready-to-eat meals, currently only available at selected stores in the cities.

While the venture opens up bigger growth opportunities in the consumer market for the group, it will take several years of gestation before turning profitable.

Established in 1987, QL Resources is the largest “surimi” fish-paste maker in Asia, producing 35,000 tonnes annually. The product is used widely in processed food. It also operates one of the largest poultry farms in South-East Asia, producing 4.5 million eggs daily and 40 million day-old chicks a year.

Both marine products and livestock farming account close to 90% of total sales, with the rest coming from its palm oil business via 42.5%-associate Boilermech Holdings Bhd

The company is noted to be well run with stable earnings. 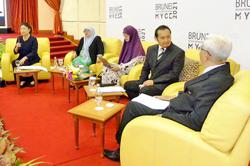