JAKARTA: Multinational chocolatiers have spent almost 20 years trying to crack Indonesia's booming confectionary market, only to build a share that pales in comparison with other emerging economies as long-established local producers fend off foreign incursions.

"The market leader is very strong because it was the first to set the taste for chocolate in Indonesia," Nestle Indonesia confectionary business manager Rully Gumilar told Reuters.

"It's like David fighting Goliath," he said. "It's very big and has huge power, while we are small even though we are a multinational."

Such struggle against a local incumbent is not uncommon among global consumer firms in the world's fourth most-populous country - a tropical archipelago with complex distribution channels, run-down infrastructure and a retail sector dominated by family stores that lack air conditioning to keep goods cool.

But the rewards are potentially huge considering consumption accounts for more than half of a steadily expanding economy, while an increasingly affluent middle class promises ample room for growth.

The chocolate confectionary market is likely to jump 42 percent to 19.5 trillion rupiah ($1.49 billion) in the next three years, data from researcher Mintel showed. That compared with 11.7 percent in the United States where, as in other developed markets, growth has slowed over the past five years.

Nestle entered Indonesia in 1971 and in the 1990s embarked on a major push in chocolate products, expanding to three brands. Mars and Mondelez began selling chocolate in the early 2000s and, with Ferrero, the four's market share reached 10 percent last year - 1.4 percentage point more than a year prior.

But Delfi set the benchmark taste in the 1950s with its SilverQueen chocolate bars and Ceres chocolate sprinkles, which still feature in the firm's broad line-up. Last year, its market share by sales volume reached 52.7 percent from 48.2 percent.

Such local offerings often cost less to make and so are priced lower. For instance, they tend to contain a greater proportion of cocoa powder, which can be two to three times cheaper than cocoa butter, said Ahmad Zaky Amiruddin, secretary general of the Indonesian Cocoa Industry Association.

Mayora said buying cocoa beans and making chocolate locally also keep prices competitive. In contrast, production at foreign rivals may be part of a more complex, multi-market strategy. Nestle, for instance, imports from its regional halal factory in Malaysia, which sources ingredients from countries including the Ivory Coast.

Delfi's Take-it chocolate fingers, for example, retail at a Jakarta mini-market for 5,500 rupiah ($0.42), around 8 percent less than Nestle's KitKat.

To fight back, Mondelez is strengthening its marketing and focusing on quality, its Indonesia chocolate brand manager Dini Anggraeni told Reuters. Mars declined to comment; Ferrero did not respond to requests for comment.

Nestle's Gumilar said his firm is trying to find a recipe that balances its global quality standards with local preferences - "the holy grail of the chocolate category" - as well as stepping up product launches and marketing. 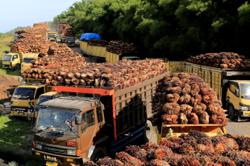