THE tussle between keeping open green space open and green, and development, is never ending.

This struggle was brought into focus once again when Taman Tun Dr Ismail (TTDI) residents came out in droves to protest against the proposed development in Taman Rimba Kiara about a week ago. Objections by stakeholders were submitted to KL City Hall on June 29.

The period of objection is over but the debate continues.

The issue is a lot larger than Taman Rimba Kiara, an area of about 12 acres. It is bigger than Bukit Kiara, formerly a rubber estate plantation of about 1,600 acres. It is even bigger than Malaysia. It is a global public good, pursued by many global cities, attained by a few.

Taman Rimba Kiara is symbolic of what most nature lovers, from Kuala Lumpur to London to New York are seeking – open green space within walking distance of one’s home. The exhilaration of waking up in the morning and taking a 10 to 15 minute walk, or a short drive, to the park.

TTDI has thrived over the years because it has open space tucked in a little corner. Taman Rimba Kiara is part of the larger Bukit Kiara.

But there is this incomprehensible desire within the local and planning authorities and the government at large to sell land for development at the expense of having green space. While on one hand, they spew politically correct statements about having open space to make a liveable city, on the other, they sell out those very principles by opening up land for development.

London’s Green Belt covers more than 2,000 sq miles. Despite the scarcity of housing, the local authorities continue to guard its park land jealously. Downtown New York is bursting at the seams but doing away with Central Park is non-negotiable.

TTDI is neither London nor New York. But if Kuala Lumpur aspires to be considered in the distant future as a great city, it has to stop building itself into decline.

Weekend resort: The Lembah Kiara recreational park is a weekend getaway to many people from Taman Tun Dr Ismail, Petaling Jaya and Damansara.

Families who are land-owners

The protest over the building of social housing and serviced apartment units in TTDI has brought into focus how the different levels of government, from the federal government level right down to local and planning authorities view open space and development.

According to a source who designed and laid out the present structure of what is now Taman Rimba Kiara, he used that 12 acres as a nursery. This was about 40 years ago.

“Not a nursery with little potted plants. But a nursery for the planting of trees which, on reaching a certain level of maturity, they were to be transfered to another site,” he says.

The source was tasked to create Kuala Lumpur’s National Botanical Gardens, a project of “at least 100 acres” under the federal government and it was supposed to be located in what is today known as Bukit Kiara.

The entire Bukit Kiara was about 1,600 acres and was a privately-owned rubber estate plantation. One was Semantan Estate, jointly owned by the Eng Lian Group and Ng Chin Siu & Sons Rubber Estates Sdn Bhd.

Ng Chin Siu & Sons was also the holding company for Bukit Kiara Estates, the other rubber plantation on Bukit Kiara. Both these families were major land owners of Bukit Kiara, according to a report by a local daily.

According to the source who declined to be named, the government evoked the Land Acquisition Act 1960 which allowed it to acquire properties for any public purpose, or any purpose which the government felt would be beneficial to the economic development of the country.

Under the Act, it could also acquire the land for mining, residential, agricultural, commercial, industrial or recreational purposes. The patriarch was dead and buried at Bukit Kiara itself. His horse shoe-shaped tombstone was there until quite recently, near the entrance to Kuala Lumpur Golf & Country Club. It was compulsorily acquired at the-then prevailing market rate, although the family did not want to sell the land, the source says.

Today, a developer’s sales gallery sits on that spot.

It is unclear as to actual purpose why the federal government compulsorily acquired the land or how serious it was about the National Botanical Gardens.

The source was told he would be responsible for the setting up of the National Botanical Gardens of no less than 100 acres, and on which would be sited a cemetery the likes of Arlington National Cemetery in the US for its fallen heroes and the National Science Centre.

For 10 years, the source selected the trees and planted them in the nursery. He also designed the layout of what is today known as Taman Rimba Kiara. This was during the 1970s.

To him, it was a rectangular piece of land which he used as “The Nursery.”

And across from it was West Valley Park, which is today simply known as Bukit Kiara and which is popular with hikers and families wanting a steep climb.

While still tending his nursery, the source received a visitor, a corporate figure aligned to the government who was allowed to use about 70 acres on Bukit Kiara for his project. He tried to “placate” him with another deal. That project by this corporate figure essentially meant the end of the National Botanical Gardens. It was aborted while in conception because the government was of the view that the botanical gardens – a public good – was not as important.

“I was not interested in his project,” says the source.

Hurt and disappointed with the way things turns out, he “walked away” from the nursery and the work he did for a decade.

The land was later carved out for various other purposes including the project which scuttled the plans for a botanical gardens. The National Science Centre became a reality.

The source reckons the government was “not that serious” about the botanical gardens. It was just “uncertain what to do with the land” after buying it. The purchase coincided at a time when rubber plantations was losing grounds to oil palm estates.

The rubber company was wounded up and the Indian community who worked on the Bukit Kiara Plantations were compensated with money and longhouses, at the current spot, were built.

“But those long houses were not meant to be a long-term feature from the 1970s until today,” the source say.

According to various press reports, TTDI residents are not against social housing, to number about 350 units, for the 124 families of former rubber estate workers currently living in the long houses. That site is about one acre.

But they are against the 1,776 serviced apartment units being proposed and planned on Lot PT 9244, Jalan Tun Mohd Fuad, which is the 12 acres of Taman Rimba Kiara.

However the question as to why the government compulsorily acquire the land in 1980 and only to sell it again to developers over time still arise?

Why couldn’t a small portion be carved up for afforable housing?

When City Hall approved the proposed building of mixed development project with 1,776 units, was any study done on the road systems and other infrastructures to support the people?

The issue goes beyond what is happening at Taman Rimba Kiara.

Something has gone wrong with the planning. The land allocated for the National Botanical Gardens just 40 years ago is now carved out bit by bit for development over time.

We do not need to go to London’s Kew Gardens or New York’s Central Park. Tiny Singapore has a Botanical Gardens. And about 80% of Singapore’s more than 5 million population live in the government housing.

So many questions, so little answers.

In the meantime, the people are resisting the development and still await signal from the City Hall on their next move. 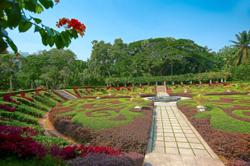