, which has been involved in a long-drawn-out takeover of Kian Joo Can Factory Bhd

The tin can manufacturer owns a 32.9% stake in Kian Joo, a stock in similar business but commanding a bigger market share and whose earnings are growing.

Based on Kian Joo’s market cap of RM1.39bil or RM 3.15 share price, Can-One’s block is valued at RM460.27mil. This is the amount it stands to get if the takeover exercise of Kian Joo goes through. The deal made some headway in June following a decision by the Court of Appeal to dismiss an attempt by a former Kian Joo director, Datuk Anthony See Teow Guan.

Teow Guan belongs the See family who founded Kian Joo more than four decades ago. He was voted out of the board at the company’s AGM earlier this year. There are a couple of catalysts driving interest in Can-One, one being a special dividends for shareholders could be on the offing. Another is Can-One could use the money to retire its debts to bring its gearing down. As at June 30, its loans and borrowings stood at RM262.4bil while cash was at RM71.29mil.

In November 2013, Aspire Insight Sdn Bhd made an offer to take over Kian Joo at RM1.47bil or RM3.30 per share. The parties involved have until March 23, 2016 to sign a definitive agreement - the fourth extension in two years running to fulfil all the relevant conditions. The debate continues on whether the offer price should be revised. But so far there is no indication that Aspire Insight intends to review it although Kian Joo’s shares have been inching up recently to close at RM3.15 yesterday. According to Public Invest Research it is difficult for the See family to scupper the exercise unless it manages to get a number of institutional investors on its side. 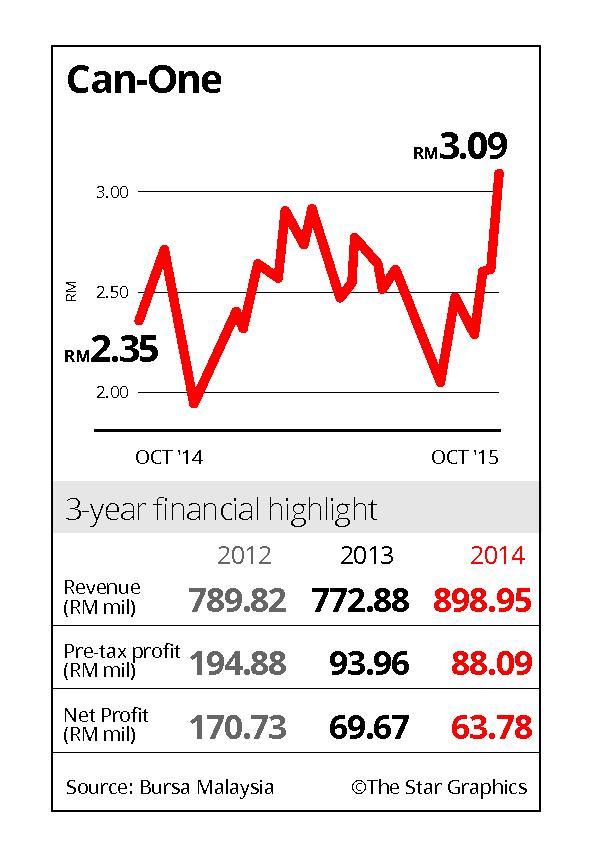 Teow Guan’s elder brother Datuk See Teow Chuan has accumulated up to 8.6% of shares in the company now, while the other substantial shareholder is the Employees Provident Fund (EPF) with 10%. Notably, Aspire Insight is a joint venture between the EPF – which owns a 40% stake in the company through its unit Ekuiti Merdu Sdn Bhd – and Can-One Bhd’s former chief operating officer Chee Kay Leong. Chee owns the remaining 60% stake through private vehicle Alleyways Sdn Bhd.

What surprised many was Chee’s resignation from Can-One two days before the takeover offer was launched. Interestingly, soon after Aspire Insight’s offer Japan’s Toyota Tsusho Corp came in with an offer to take up a 51% stake in Kian Joo at RM3.74 per share. But that was not accepted by the company.

Kian Joo’s takeover exercise has been bogged down by lawsuits initiated by members of the See family. In November last year, the Kuala Lumpur High Court struck out See’s lawsuit against Can-One, with the last major hurdle seemingly out of the way for Aspire Insight to go ahead with the planned exercise.

Public Invest says that should the proposed transaction materialise, shareholders will have “a certain RM3.30 per share in our pockets.”

“If not, we will still see that value materialising. Over the longer-term it remains imperative that parent company Can-One derives stronger earnings (to increase its intrinsic value) from Kian Joo for greater dividend income.”

Kian Joo’s earnings have been growing steadily in recent years. It posted another good quarter with net profit up 28% to RM35.3mil in the second quarter ended June 30.

In terms of cumulative net profit for the first half of FY2015, it came in 34.2% higher at RM63.6mil. “This was slightly ahead of expectations and making up 54% of our full-year estimates,” notes Public Invest.

Kian Joo is the market leader in aluminium and tin can packaging with a market share of about 60%. According to a market observer, based Kian Joo’s first six months results, its net tangible asset (NTA) has risen to RM2.72. It is estimated to add another 10 sen to for the full financial year of 2015, bringing the NTA to RM2.82. When the RM3.30 offer was made, the stock’s NTA stood at RM2.33 or 1.42x and going by this benchmark the offer price should be revised to at least RM3.86 per share, the observer adds. Can-One’s bottom line is reflecting more from its 32.9% associate.

In the second quarter ended June 30, Can-One’s net profit jumped 76% to RM23.67mil, while revenue dropped nearly 7% drop. According to stock exchange filings, the higher profitability came from a stronger US dollar and higher contribution from Kian Joo that contributed RM11.4mil net profit to Can-One. This was an increase of RM2.5mil in the same period last year. Earlier this year, Can-One’s shareholders voted for the buyout of a minority 20% stake in F&B Nutrition Sdn Bhd - a producer of sweetened condensed milk in which it had 80% interest. It was an all-share deal worth RM112.9mil.

The company said that F&B is expected to contribute positively to earnings given that it has posted a 44.5% cumulative average growth in the last four years. It will also see the 76-year old founder of F&B, Teh Khoy Gen emerge as the second-largest shareholder in Can-One with close to 21% stake. Its largest shareholder Yeoh Jin Hoe’s stake in Can-One will be diluted to 23.5% from 29.63%. Yeoh is Can-One’s former MD and currently Kian Joo’s group MD.