’s 60% owned joint venture had received a letter of award from the Penang government to carry out the alternative transport master plan and to provide new reclamation sites.
The company confirmed a StarBiz report on Friday that SRS Consortium had been picked to be the Project Delivery Partner (PDP) to oversee and realise certain key components in the RM27bil in the master plan.
Gamuda said SRS Consortium would implement the plan which would comprise of different public transport companies in Penang Island and Seberang Perai and provide new reclamation sites.
The other members of SRS Consortium are Ideal Property Development Sdn Bhd  and Loh Phoy Yen Holdings Sdn Bhd which will hold 20% each.
“The scope, terms and conditions of the appointment will be finalised between the State Government and SRS Consortium following which the PDP agreement shall be executed within six months,” it said.
StarBiz reported that on Aug 12, State Local Government, Traffic Management, and Flood Mitigation Committee chairman Chow Kon Yeow announced that a PDP had been appointed and the company was given two weeks to accept or decline the appointment.
The company will undertake the RM5.3bil LRT project and a RM4.5bil 20km pan-island linked expressway linking Bayan Lepas and Tanjung Bungah, which are among the key components of the PTMP first phase.
The other schemes in the first phase that Gamuda will implement include a RM100mil tram and catamaran system, and a RM100mil highway interchange upgrading project. Although Gamuda has received the award letter, the company still has to obtain a LRT license from the federal government to implement the project in Penang. 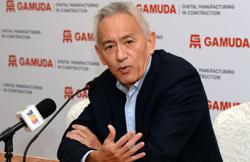