The rise and rise of Desmond Lim

Not that he needs any help to enter the Must Watch List of Malaysian billionaires.

Best known for Pavilion Kuala Lumpur, Lim was not known as a property developer although he amassed his wealth that way.

He earned his stripes after he injected the mall and office block Pavilion Tower into Pavilion Reit, where he is chairman. Lim, 53, is also the executive chairman of Malton Bhd

. Privately, he has also many property interests.

The filing by SelProp, one of the original land owners of Damansara Heights, says that it has sold 6.34 acres of freehold commercial land to Jendela Mayang Sdn Bhd, an obscure company linked to Lim for RM450mil, or RM1,628 per sq ft, setting a new benchmark in the area. 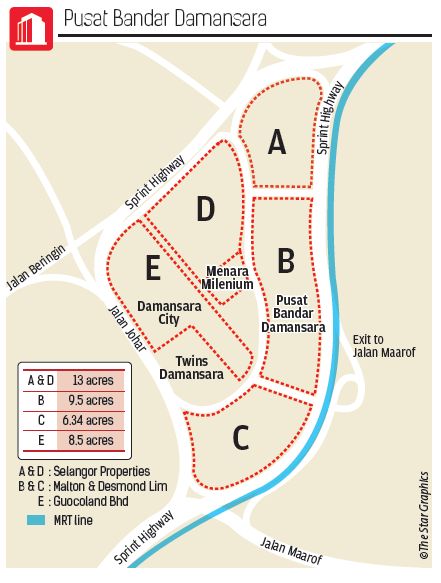 The land is located next to Pusat Bandar Damansara (PBD), where nine office blocks are currently sited, and which Lim also has a stake in after a long legal battle over the last several years with Johor Corp (JCorp), the state investment arm of Johor. That tussle was settled when JCorp and JCorp-linked companies exchanged PBD for cash RM500mil, a 20-storey commercial building V Square in Petaling Jaya and 80,000 sq ft of future office space in the redeveloped PBD with Malton and companies linked to Lim.

That deal seems to be in Lim and Malton’s favour because as a property professional puts it, “What’s V Square compared to PBD?”

As for this latest deal with SelProp, a source says it was “a tightly fought battle” as the 6.34 acres was independently valued at RM300mil. SelProp acquired it in 1995 for RM106.6mil.

From a real estate perspective, there may be reasons why Lim wanted that piece of land so badly – and quickly, sources say.

Impian Ekspresi Sdn Bhd, the owner and developer of the 9.58 acres in PBD, is in the midst of getting a development order from City Hall for a mixed integrated development there. It was reported that the gross development value may exceed RM2bil. Lim controls Impian Ekspresi.

The nine blocks are scheduled to be demolished by the end of the third quarter of this year to make way for serviced apartments, offices and a hotel, a source says. Lim plans to build Pavilion 2 in Kuala Lumpur’s most valued location with Damansara Heights, Bangsar and Bukit Tunku as its direct catchment area.

At the same time, Lim is battling with time. MRT Corp is currently building two MRT stations – Semantan and PBD – there. The PBD station will directly access the 6.34 acres which Lim purchased this week.

With these two parcels, Lim has effectively increased his land holdings to about 18 acres, or 38% of the 46 acres of the triangular piece of land bordered on two sides by the Sprint Highway and Jalan Johar. The combined acreage will give him a lot of flexibility.

SelProp has now moved into second place with 13 acres (or 28%) of vacant land on that triangular plot. SelProp also owns Menara Milenium.

It seems that time was of great essence because of the construction of the two MRT stations and the development order he is expecting as he would then be able to integrate the respective components on both pieces of land. The retail portion may be located on the new parcel to leverage on MRT linkage, a source says.

He may have paid a premium for that 6.34 acres because it will have direct access to the PBD MRT station which is currently being constructed right on top of the Bangsar-Jalan Damansara intersection. With that site now in his pocket, he will be able strategise his land holdings more infinitely.

Sources say whatever plans Lim previously had for the original 9.58 acres that he battled for with JCorp have now changed irrevocably with this purchase.

They will have to “go back to the drawing board”. The nine office blocks were developed in the early 1980s with a plot ratio of 4. A source says in the event Lim succeeds in getting a plot ratio of 8 – that’s a big if – he will have 3.3mil sq ft of space. This will increase to 5.5mil sq ft with his latest purchase.

The Mid-Valley retail mall by IGB group, in comparison, has 1.7 million sq ft of net lettable space, excluding the offices. Together with The Gardens, the retail space totals 2.5 million sq ft.

The niggling doubt about this equation is that the Klang Valley has a glut of office and retail space. Lim’s dealings with City Hall when the Bukit Bintang Girls’ School land was privatised - the current site of Pavilion KL - may have strengthened his position with the local authorities, a source says.

Lim may be able to improve the plot ratio for his PBD development but the location of the King’s palace a few kilometres away is a huge consideration and may result in a cap, says a source.

The current on-going development there is Damansara City, by Guocoland Bhd. That project, on 8.5 acres, has a plot ratio of 5.9. A retail mall, serviced apartments, office blocks and a hotel are in the works.

As to press reports about building Pavilion 2, Lim’s retail prowess is second to none. When Pavilion KL was developed, the idea was to have large-sized duplex retail lots with street frontage of more than 2,500 sq ft each. It will be interesting to see how PBD will shape up. It will change the skyline and landscape of Damansara Heights, not to mention the retail scene there, which is currently dominated by Bangsar Shopping Centre and Bangsar Village in Bangsar, a high-end suburban township where its double-storey terraced housing is hovering around RM1.8mil. These two malls are owned by Bandar Raya Developments Bhd and family-owned Eng Lian group respectively.

On Lim’s ambitious plans for Pavilion 2, a source says: “It will take off. He has the ability to pull it through. Money is the main consideration.”

About four years ago, he paid RM7,209 per sq ft for a 29,127 sq ft parcel located between Grand Millennium Hotel and Pavilion KL. Slightly over half an acre, that plot represents a possible integration for the mall. The seller, Millennium & Copthorne Hotels plc, is controlled by Singapore’s Kwek Leng Beng who had originally planned to build a golden bullet-shaped tower housing serviced apartments and connect it to his hotel.

At the Malton Bhd level, there are plans to work with Ho Hup Construction to develop a massive mixed integrated development in Bukit Jalil. He has 50 acres there, and Ho Hup 10.

In downtown Kuala Lumpur, Lim is also linked to another 5.4 acres where Seri Melayu Restaurant used to be sited on near Chulan Square. The restaurant belongs to AmBank group’s Tan Sri Azman Hashim but he failed to renew the lease. He previously had a 25-year lease on his restaurant, as source says. “The fact that he failed to have the lease renewed is an indication that Lim has strong backers,” the source says.

On why SelProp reduced its land holdings from 19 to 13 acres, a source says they got “a very good price”.

Excitement reigns high at Impian Ekspresi, both for the 9.58 acres and the recent purchase by Jendela Mayang Sdn Bhd, another company linked to Lim, as they want to start work as quickly as possible.

Since the resolution of the Malton-JCorp tussle over the PBD land last September, tenants have been issued month-to-month leases, prompting some to move. Impian Ekspresi, the owner and developer of PBD, is offering to buy back the units from owners. There may be some unhappiness vis-a-vis the price. The sweetener: owners have the option to buy back new units three years from today at the same price. 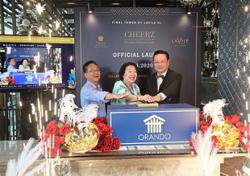 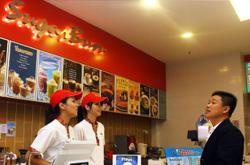