LAST week, I had the opportunity of meeting up with Wan Ahmad Saifuddin Wan Ahmad Radzi, the chief executive officer of Unitar Capital Sdn Bhd (UCSB), the owner and operator of Unitar International University, for a Power Lunch session at The Royale Coffeehouse at the Royal Bintang Damansara.

As it's the case with all these sessions, there were things lined up for discussion with regards to Unitar and the direction it was taking. However, as Wan Ahmad was from an institution of higher learning, I was keen on getting his perspective on certain issues.

One thing that I can't help but notice is that a vast number of Malaysians these days are not fluent in the English language, and this was not only limited to their daily command, but also from an educational perspective. I've always wondered how students who had gone through their formal education predominantly in other languages could be expected to suddenly switch mediums to the English language once they begin to pursue their tertiary education. How do they cope? I posed this question to Wan Ahmad.

He agreed that the level of English language competency has been an issue to tackle in Malaysia. “Yes, we are challenged by language and communication skills. But I think we need to work out the sort of training that allows them to accelerate the mastery of the language.”

He went on to share with me that there have been instances, especially in more rural areas, where students were not prepared to immediately step into their tertiary-level learning programmes because of a lack of English language skills. However, rather than letting this be a barrier to them pursuing a higher education, Unitar advises and assists them with intensive English language courses to prepare them to make this switch in languages.

Speaking of student preparation, Wan Ahmad shared his views on the newly imposed ban on new private colleges and how the worrying number of unemployed graduates had fuelled the ban. Unitar, he says, has been actively making changes to address this issue directly. “It's a core strategy. We have to be focused on employability. The sort of students we produce must be employable, with skills like critical thinking, problem solving, domain knowledge, etc.

Secondly, we must, from an institution perspective, provide that industry linkage.” Unitar is currently working on revamping its curriculum to allow the introduction to industry to be made earlier. Starting possibly in the first year, students will be encouraged to seek part-time employment while studying, then moving on to internships in their second year before completing their final year with an industry-linked project. Wan Ahmad explains that this is important, as it allows their students to know the companies relatively well over the three-year course period. This, in turn, also allows the companies to get to know their students better.

Wan Ahmad also believes that this step can be taken further, and it is such extra initiatives that differentiate Unitar greatly from other institutions.

“Without resorting to over-analysing, there's a simple analogy which can be used in this context. You have to bring the workplace into the classroom, and the classroom into the workplace. Getting a bigger number of our partners to be involved in the teaching is a good thing so that you don't just get the theoritical part, but also the practical aspects.

In some institutions, sometimes, the part-timers are the important components to bring that industry link. But that's not an institutional framework. But here, we're saying let's build this into our DNA. There's a system where companies can work directly with us. We place our faculties into the companies so they can get exposure, and place their workforce into our teaching staff and into our programmes, amounting to us taking on some of their human capital development as well.”

Unitar has been in the news lately with regards to their recent tie-ups with Maxis and Themed Attractions and Resorts.

“One of our deans has a very active Facebook page. He's the first PhD holder in Early Childhood in the country. He's got a huge following. When he posted that Unitar students would be working in Legoland and Kidzania, there was a huge response from his followers. The demand is there. I think people appreciate exposure. Which is why we choose the brands we collaborate with very carefully, brands whose value are recognised by the people.

At the same time, there must be synergy. Any programme in Unitar, by the time we line up the partnerships, would have this. Which is why we're revamping our curriculum, to make sure this industry linkage is embedded,” Wan explains, before going into the details of how the tie-ups would work to benefit not only their students, but also the companies. Unitar will work with the companies to not only secure internships and possible job placements for their students, but also contribute to the companies by being their knowledge partner, by collaborating to see what sort of research they could provide that would be beneficial to the companies.

Wan Ahmad adds that Unitar puts in a lot of thought when it comes to choosing the companies they partner with, right from the angle of how the companies they select would mesh well together. “For example, we're working with Lenovo. Maxis and Lenovo are a beautiful fit. Then, we're going after hardware, vendors and networks, so that it completes the telco side of things.”

As part of these tie-ups, Unitar is looking into the possibility of working together with companies to open boothes and stores which would be entirely run by students. Wan Ahmad feels that creating the opportunity for students to be exposed to the real world, enhancing their educational experience in the process, is somewhat the missing link in the current standard education system.

“We're trying to do something that I think is pretty radical. Moving very consciously towards a learned-centred environment. The term is social constructivism. You need to construct knowledge yourself as opposed to your lecturers telling you and you going home to study. You figure things out for yourself. You work in your groups and tell us what it's all about. I can tell you that this hardly happens anywhere. But it has to happen, as otherwise, we're going to get what we're getting now, 60,000 to 80,000 unemployed graduates every year. Why is this so? Because they are not participating in their education, they are just consuming it. That's an issue. If you're consuming it, then the only thing you can do is regurgitate it. You can't think. We need to teach them a different method of learning. We don't want to learn for the sake of learning only. We want to get them thinking.”

Another important factor we discussed is the accessibility to such a mode of learning. In terms of pricing, can people afford such education? It would cost about RM40,000 to pursue a standard three-year degree programme, which Wan Ahmad says is an affordable and reasonable price compared to some other private institutions in Malaysia.

And, to make it possible for students to pursue their education without having to move states, Unitar has planned the expansion of its regional centres. It currently has nine regional centres, and is looking to expand into Pahang and Terengganu by the end of the third quarter. Wan Ahmad says that when it comes to learning, access is very important, and that Unitar has always strived to make this possible. It has even opened 11 centres on army grounds so that even our troops would be able to enjoy this.

As for its main campus, it's currently under construction. Wan Ahmad, having just come from the site, whips out his cell-phone to show me pictures of the upcoming building. The campus, explains Wan Ahmad, is going with a city-style campus concept, which fits into the desire of Unitar to integrate into industry.

“You don't want that barrier of having to go out of town. Unitar should be within the town vicinity. One of the things we want is to have that level of proximity to industry.”

Along with this new campus and upcoming centres, Wan Ahmad shares that Unitar's plans actually go beyond just the domestic platform. “Our vision is that in the next two years, after we're stabilised and on the growth path, students from developed countries would come here to study. Why? Because of the learning approach and the things that we're doing now. When we put the word “international” in our name, Unitar International University, we didn't just mean getting students from developing countries here. If we do it really well, I don't see why we can't compete with other institutions.”

With that said, we wrapped up our session by discussing the number of international students the university currently had and the trend of the West coming to the East to consider more affordable tertiary education options. 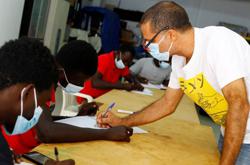 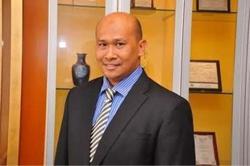