The Hartonos run the Djarum Group on sound principles

THE cigarette lighted by Victor Hartono looks like a sparkling flambeau, all the more so because of the kretek, the crackling sound it makes. The Djarum brand, like most Indonesian cigarettes, crackles when puffed. Victor wears the Djarum Group’s uniform with the Djarum logo, just like any other employee, even though he is the chief operating officer and the empire was founded by his grandfather.

His perfect English is a rarity in a country where English is a second language. That’s because his father Budi Hartono studied in a Dutch school where English was mandatory and wanted his children to master the language, which was hardly taught in local schools those days. Budi would make his children read English books and magazines aloud to give them a good grounding.

Budi knew he would have to rely on his children to run his group of companies one day. So, he sent them to the best schools in Indonesia and abroad. Victor went to the University of California to study mechanical engineering. After a few years, he took up business administration at the Kellogg School of Management, Northwestern University.

Being the eldest son, Victor got to know PT Djarum’s business at a very young age. “It came naturally to me, something that we talked about every day. I would go to the office often and play with the charts, which were like Lego blocks.” He was barely 12 when he used go to the then small office, one block away from where he sits today. “Many employees whom I had seen when I was small are still here.”

Victor comes from a line of well-to-do ancestors. His grandfather Oei Wie Gwan started his conglomerate selling firecrackers called Cap Leo. He ran a factory which made firecrackers in Rembang in central Java in 1925 and made sure he left a legacy for his future generations.

“My great-grandfather and grandfather were together in the business which was their main source of income. When the Japanese took over Indonesia, they closed down all the firecracker manufacturing companies because of the usage of gunpowder,” adds Victor. “Till today, there is no company which legally produces firecrackers in Indonesia.”

In the 1960s, when Indonesia suffered a food crisis and people had to queue up for food, Victor remembers his father and uncle Bambang enjoying a comfortable lifestyle with no dearth.

When Oei died, the company was handled by Budi and Bambang, who ran it together since 1963. The warm relationship between the two brothers has made PT Djarum worth an estimated US$2bil. “Ever since I can remember, our company has been one of the largest producers of cigarettes in Indonesia.”

Though Victor’s father and uncle are not involved in the daily operations of the company now, they are still the major decision-makers.

“I have learned a lot of things from them,” Victor says. “Like there should be a lot of give and take – communication and clarifications – to avoid misunderstandings. My father and uncle do not rely on soothsayers, feng shui or black magic. Everything is based on rational decision-making.”

Though tycoons, Budi and Bambang are known to live a life of simplicity. Both enjoy eating the famous Indonesian dish soto (soup) on the roadside. They keep a low profile, dress simply and maintain good rapport with their employees. Most of the employees have been loyal and stayed on with the company, some for nearly 40 years.

“My dad and uncle are simple men who are not flamboyant. They do not seek fame and love to work. They are quiet men who persevere when a problem is thrown at them. I hope I can be like them one day.”

Although Victor is given the responsibility of running PT Djarum, his two brothers and four cousins are stakeholders in the group. “We want a common bright future together, the stakeholders and employees. The focus is on enlarging the pie.”

A bachelor at the age of 40, Victor spends most of his time on the business and the group’s charitable foundation. He is the president director of the Djarum Foundation, having taken over from his father. The foundation is PT Djarum’s corporate social responsibility arm, seeking to foster “excellence through community, sport, environmental conservation, educational and cultural expression programmes”.

It has sponsored plays and musicals depicting the Indonesian culture – and free cataract operations for the needy. Millions of trees have been planted to support the go-green environment policy. Over 500 scholarships are handed to students annually in 83 schools. Since November 1984, a total of 7,777 scholarships were awarded in 98 universities. Funds are also allocated for the construction of school buildings.

Victor shares his father’s passion for badminton. In 1969, his father established the Djarum Badminton Club which Victor runs now. It was while watching the 1984 Thomas Cup tournament that he developed a love for the game. Indonesia won the cup and seven out of the eight players were from the Djarum Badminton Club. Watching the players from his company’s club inspired Victor to make badminton a sport for life.

“Badminton is the only sport where Indonesia has reached world class (status). We have competed sustainably for a long time.”

However, he rues that things have been changing over the years with electronic gadgets ruling people’s lives. The upsurge of television soaps in the early 90s diverted the attention of the younger crowd. This was followed by the birth of the social media in early 2000. The lack of motivation has slowed the achievement level of the badminton players.

Victor says that in the past, an estimated 40 million Indonesians were active players. “It was easy to select (a team) from 40 million players. But if there are only five million players, then we have a problem,” he chuckles. Despite Indonesia’s declining badminton triumph, the Djarum Foundation intends to continue producing champions.

“We want to help Indonesia to fulfill its promise as a well-rounded super power. It is to fulfill the destiny Indonesia should have,” he says. “Our country shouldn’t be only a good supplier of coal, gas, energy and oil. We should also excel in sports, education and (protecting) our environment.”

“The nature of our programme is based on giving a chance to talented people regardless of their background. Even if they are rich kids, (if they) are good (at) playing badminton, we will help them to become world champions. We train kids from the age of 11-19 for free.

“We are biased towards the talented.”

The Djarum Foundation’s future project will focus on providing clean water with investment in facilities to purify water. “Clean water is still a major issue in this country despite its independence 67 years ago,” Victor says.

Victor’s convictions behind running the company and the foundation are based on ancient Confucian teachings. He says: “Your goal in life is not going to heaven but creating a better world by bringing peace on earth. You can achieve this by helping yourself, your family, your surroundings, and your country. (By doing so) you help the world.

“I am a de facto Confucian follower.” – China Daily 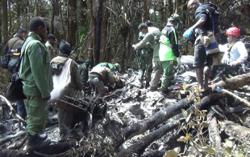