A rose by any other name would smell as sweet. In the case of Greece, default by any other name just stinks! The plain truth: Greece is bankrupt. Greece's sovereign debt crisis deepens daily as the gap in reality widens between politically driven “in denial” views of European Union (EU) leadership and market-place views as reflected in 5-year Greek bonds trading at a yield close to 20%; Standard & Poor cutting Greece's rating to triple-C (the lowest credit rating ever); and highest premiums payable on CDS (credit default swaps, used as insurance to protect investors against defaults) on Greek debt. Probability of default by Greece over the next 5 years has jumped to 86%.

Today, a CDS will cost US$2mil annually to insure US$10mil debt over 5 years. Markets have indicated for some time Greece suffers from a condition of bankruptcy rather than a crisis of liquidity (i.e. cash-short).

This simply means Greece cannot survive without significant debt relief and restructuring, combined with an overhaul of the ways its government collects revenue and expends. In essence, Greece has 2 major problems: it has too much debt and it cannot grow. I am afraid more and more of EU will get contaminated.

Greece should not have been into the euro in the first place. It failed to join in 1999 because it did not meet fiscal criteria. When it did so in 2001, it was through phony budget numbers. As Twitter R. Cohen wrote: “Europe's bold monetary union required an Athenian imprimatur to be fully European. So everyone turned a blind eye.” But Greece has had an awful history. The 1912-13 war wrested northern Greece from Ottoman control. Then came the massive exchange of 1923 where 400,000 Muslims were forced from Greece to Turkey and 1.2 million Greek Orthodox Christians, from Turkey to Greece.

A military dictatorship followed in the 1930s; brutal German occupation in 1941-44; and a civil war in late 1940s. There was the rightist dictatorship of 1967-74, not to mention the on-going conflict with Turkey over Cyprus. In “Twice a Stranger”, B. Clark wrote of Greece as a society “where blood ties are far more important than loyalty to the state or to business partners.”

It would appear EU membership provided some balm to Greek wounds. It detoxifies history. So Greece took to the EU as a passport to live on the never-never. The bottom line: a monetary union among divergent economies without fiscal or political union support has no convincing historical precedent. For a while, the easy-money, easy-lifestyle allowed everyone to overlook peripheraleconomies like Greece from becoming uncompetitive with the euro (with no drachma to devalue) and not showing any signs of “converging” (closing the gulf between strong and weak nations within EU), but amassing unsustainable deficits and debt. Greece remains a nation suspicious of outsiders and a place where state structures command scant loyalty.

This does not abode well. We now see a Greece resentful of deep spending cuts, and of the sale of state assets meted out by technocrats from outside. They feel the poor and unemployed are paying for the errors of politicians, and a globalised system that punishes those left behind. Strikes and violence are a measure of a EU that now leaves most Greeks unmoved by the achievements of European integration.

It is true a sovereign state, unlike a firm, has the power to tax. In theory, it can tax itself out of trouble. But there is a limit on how far it can tax before it becomes politically and socially unsustainable. Already, Greece has a debt/GDP ratio of 143% in 2010, rising to 150% this year. It is too high to convince creditors to continue lending.

In practice, the market expects Greece to reduce its debt ratio considerably before it can borrow again. This means it has to create a primary budget surplus (revenue less non-interest expenditure) in excess of 8% of GDP to be credit worthy again. Among advanced nations, none (except oil-rich Norway) has managed to attain a durable primary surplus exceeding 6% of GDP. Greece is insolvent.

This is a dire situation. Government bonds serve as a reference asset by setting the “riskless” rate of interest. So any doubts about its value can cause turmoil. Indeed, solvency of the Greek financial system is at risk. So are other European financial institutions. Equally vital is contagion with its sights set firmly on other debt-distressed nations notably Ireland, Portugal, Spain and Italy.

But it doesn't stop there. Top Europeans have warned contagion to EU members could spark off a crisis bigger than the Lehman Brothers collapse in Sept 2008. So, it is not difficult to understand the hard line taken by the European Central Bank (ECB) aimed primarily to protect European banks which need time to strengthen their capital base. For obvious reasons, it has rejected any sort of restructuring of debt raising the spectre of a chain reaction, and threatening to punish any restructuring (re-negotiation of the terms of maturing debt) by cutting banks' access to liquidity.

Moreover, credit rating agencies would deem any such action as a default (i.e. non-payment of due debt). With Greece insolvent, the EU has taken the narrow road of beefing up the financing for Greece (which can't refinance itself in the market), while using moral suasion to persuade private creditors to roll-over their bonds. It is buying breathing space.

More denial doesn't work just prolongs the agony. What's happening to Greece is distressful. Over the past 12 months: the number of unemployed rose by close to 40%; unemployment is above 16% among youths, it's a devastating 42%. IMF estimates showed its GDP contracted by 2% in 2009 and 4.5% in 2010 and will shrink by 3-4% this year.

Even at today's low interest rates, Greece's government interest payments alone amounted to 6.7% of GDP, against 4.8% for Italy and considerably higher than all other major European nations and the United States (2.9%). Even Portugal's ratio is lower at 4.2%.

What Greece needs is deep economic reforms or fiscal transfers from the EU which help address deepening market concerns about sustainability of its huge debts. Without these, the crisis will simply be deferred.

The message is clear: Greece's debt load at Eureo 350 billion or 150% of its expected economic output this year, is simply too large for the EU troika's (plus ECB and IMF) strategy to succeed. Athens had accepted a package of Euro 110 billion of EU/IMF loans in May 2010. But it now needs a 2nd bailout of a similar size to meet financial obligations until end 2014 when it hopes to move seamlessly into the new ESM (European Stability Mechanism) bailout fund (which takes effect in 2013) to prop up fiscal miscreants.

Latest draw-down involves release of a vital Euro 12 billion very soon but carries a proviso that parliament passes on June 29 (which it did with a slim majority) Euro 28.6 billion in spending cuts and tax increases as well as Euro 50 billion from privatisation of state assets, in addition to continuing existing austerity policies.

That's not all. The new plan calls for private creditor's participation on a voluntary basis (meeting ECB's insistence to avoid even a hint of default) or “Vienna Plus”, a reference to the 2009 Vienna initiative where banks agreed to maintain their exposure to Eastern Europe.

For Greece, the brutal austerity plans call for enormous sacrifices; indeed, no end to their agonies. Today, the situation at Syntagma Square and in front of parliament is getting more strained, angry and confused, surrounded by riot police and clouds of teargas. The people are becoming frustrated at being always at the receiving end.

On the German side, however, voters are aghast at the prospect of a 2nd bail-out, which they regard as pouring good money after bad. Germans consider the Greek government as corrupt; its tax system operates on voluntarism; state railroad's payroll is 4 times larger than its ticket sales; many workers retire with full state pension at age 45; etc.

Be that as it may, the IMF in particular needs to learn from lessons of the Asian currency crisis, where it has since acknowledged its prescriptions at the time made matters worse in Indonesia, Thailand and the Philippines, in the name of unleashing market forces to force adjustment and ignoring the adverse social and political impact of their policies.

I see them repeating the same mistakes again in Greece, paying too little heed to human suffering and adverse social impact to protect private sector creditors and pushing the end-game at breakneck pace. Germany's insistence to get private creditors share in the burden is a good soft step forward. Even so, the IMF seems too harsh.

The fact remains Greece was outstandingly egregious in its fiscal profligacy and its lack of prudent economic governance. But Greece was not the only European economy that was living beyond its means and being pumped withill-conceived loans mainly from German and French banks. Greece is today insolvent. The EU's solution addresses only immediate funding needs, without offering a credible long-term resolution. It's just a stopgap. Frankly, Greece'spolicy options are limited: either a default, partial haircut (creditors taking losses on their investments), or a guarantee on Greek debt. Bear in mind Germany remains the biggest beneficiary of the euro-zone experiment. In 2010,

Germany recorded a US$185bil balance of payments surplus or 5.6% of GDP. No doubt, the EU has since pledged to stabilise the euro-zone economy, vowing to starve off a Greek default, and the ECB has categorically ruled out debt restructuring. That leaves Greece with only deflation, a lot of it.

As I see it, this will not work. First, in a democratic Greece, people are clearly not in the mood for deeper spending cuts and more austerity. Policies can be adopted but they can fail. Second, deflation had already made Greece's debt problem worse the debt is too large and the economy won't grow with continuing deflation. It can't just deflate its way to solvency.

The better option left is debt guarantee. Issuing guarantees (preferably partially backed by Greek assets) could help persuade creditors to exchange debt for new debt with longer maturities, effectively giving Athens more time to repay. As of now, only 27% of Greek debt is held by banks, 30% by ECB/EU/IMF, and 43% by other privates. Banks are already quietly resisting voluntary rolling-over unless offered incentives. EU has preferred to use moral suasion.

EU has also resisted haircuts. Mr Axel Weber, former Bundesbank governor, has since weighed in: “At some point you've got to cut your losses and restart the system,” drawing parallels between guarantee for Greek debt and steps taken by Germany and others during the financial crisis to backstop troubled banks.

The Greek problem “is a deep-rooted fiscal and structural problem that probably needs more than a 30-year time horizon to solve. The measures Europe need to adopt are much more profound than just short-term liquidity funds.” That, of course, raises the issue of “moral hazard”. EU has since pledged to stabilise the euro-zone, and starve off a Greek default in exchange for continuing Greek deflation and voluntary creditors' roll-over. Getting banks to share in the burden remains problematic. But, a narrow policy option is taken. It's another muddle-through created in response to politics. It offers no long-term way for Greece to resume growth.

I am told the political mood in Greece improves automatically in July and August as the urbans head en masse for family villages in the islands and mountains. Surely, for a little while, human woes will be eased by exposure to the beauty of the Agean.

Former banker, Dr Lin is a Harvard-educated economist and a British Chartered Scientist who now spends time writing, teaching and promoting the public interest. Feedback is most welcome at starbizweek@thestar.com.my 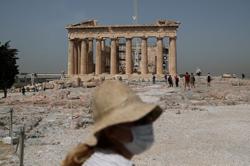 Greece to open to tourists from 29 countries from June 15 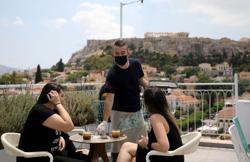