HONG KONG: Toyota Motor Corp’s Chinese auto finance unit has been fined by the authorities in the city of Hangzhou for alleged involvement in commercial bribery, China’s Xinhua News Agency reported on Tuesday.

Toyota Motor Finance (China) Co would be fined 140,000 yuan (US$20,850) for offering rebates to encourage three dealers to steer customers towards the unit and away from local banks between August 2008 and April 2010, Xinhua said, citing officials from a local administration for industry and commerce in Hangzhou.

“Toyota Motor has learned that Toyota Motor Finance (China) Co (TMFC) has received notification of administrative penalty from Chinese authorities in the city of Hangzhou, and is now closely examining the contents of the notification,” a spokesman at the parent company in Tokyo told Reuters.

He said Toyota was still trying to determine the specific nature of the issue.

According to Xinhua, the one-year leading rate at the Toyota unit was 10% to 13%. The news comes against a backdrop of increased tensions between China and Japan over a sea dispute.

China has suspended high-level exchanges with Japan and promised tough countermeasures after a Japanese court extended the detention of a Chinese captain whose trawler collided with two Japanese coastguard ships this month. 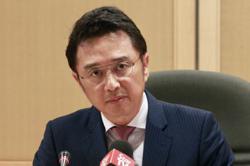