“We will bid for contracts from Petronas and also for jobs in the Middle East, especially Saudi Arabia.

“With the announcement that Petronas would increase its capital expenditure to RM45bil-RM50bil next year, we hope to get a chunk of the contracts,” he said.

Hazali said this after a sigining ceremony for the certificate of completion of four Petronas Carigali-PTTEPI Operating Co (CPOC) wellhead platforms and jackets yesterday.

Hazali said athough Oilcorp was having auditing problems, business was still as usual.

“The RM120mil contract that we received from Petronas Carigali last month is proof that our business is not affected at all,” he said, adding that it was in recognition of a small company like Oilfab. 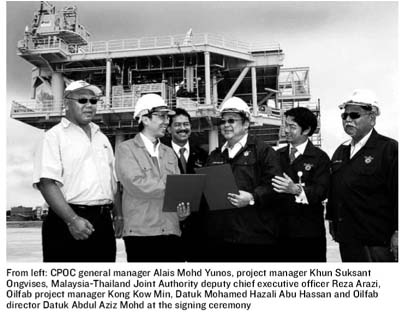 “We are still learning and will work hard to get more jobs from major oil and gas players. For that, we need to upgrade our fabrication yard facility and improve the performance of our workers,” Hazali said.

About RM30mil had been spent this year for the extension of its bulkhead and seawall, he said.

Upon completion of the extension by early 2009, it would “enable us to undertake structure jobs of more than 10,000 tonnes,” he added.

Hazali said although the company was a new player in the local fabrication industry, having been set up about six years ago, Oilfab was capable of bigger jobs, going forward.