THERE is strong demand for senior management expertise locally but unfortunately there are insufficient professionals at this level to fulfil the void, says HayGroup Sdn Bhd director Kala Kularajah Sundram.

Kala said if steps were not taken to address the issue soon it could severely impact Malaysia’s growth.

“Companies here (local and foreign) are willing to pay top dollar to hire these in-demand professionals but there simply aren’t enough of them,” she told StarBiz.

Kala said the class of senior management expertise in high demand would be those heading specific corporate divisions such as marketing or information technology.

She stressed that it was interesting to note that senior managers in Malaysia were paid more than their counterparts in the United States, factoring the cost of living in both countries. 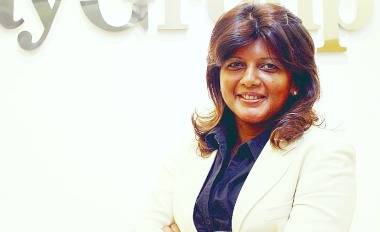 “The HayGroup World Pay Report 2008 showed that Malaysian senior managers had 33% more spending power than their US counterparts,” Kala said, implying that local companies were prepared to pay higher salaries for in-demand professionals compared with the US.

Hay Group is a leading global management consulting firm headquartered in the US that employs over 2,600 staff in 86 offices in 47 countries.

Typically senior managers in demand were about two or three levels away from top management and aged about 46 on average, Kala said.

“The existing crop of senior managers will retire within the next 10 to at best 15 years and there will be a huge void,” Kala noted.

She added that a succession plan should be in place to fill the void, besides trying to resolve the current shortage. 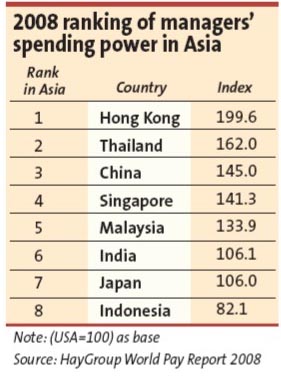 Kala said there were many companies looking for high-calibre candidates with the potential to progress into more senior roles.

“These jobs suit experienced and professionally qualified individuals but there are just not enough of such candidates to meet current and future demand,” she added.

Kala said employing expatriates to fill the void was a short-term measure that would only hurt Malaysian companies in the long-run.

She said the acute shortage of talent at professional levels required Malaysian companies to adopt a more pragmatic approach to develop a sustainable model to meet its manpower requirements. 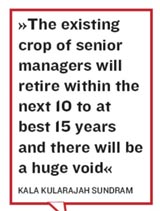 She also said there was a need to adopt a more holistic approach to reward employees across the board and not only in-demand managers.

“Tangible and intangible rewards such as planned career assignments, development opportunities, work environment as well as job/life balance options, for example, base and variable pay, retirement and health benefits should be included,” she said.

Kala added that employees with strong ambition and talent today were looking to work for companies that had a clear career path for them, besides providing attractive packages and the opportunity to learn.

“They are keen to take on new challenges and want to be appropriately rewarded for their efforts. If they are unhappy in an organisation, they will not hesitate to look for other options,” she said.

Kala said based on the World Pay Report 2008, managers in Hong Kong, Thailand, China had the highest disposable incomes in Asia.

The overall findings in the report showed that in-demand managers in the fast growing economies of the Middle East, Asia, and eastern Europe tend to have the highest spending capacity or disposable incomes.

Globally, managers with the highest disposable income - out of 51 countries surveyed in the report - were found working in Qatar, the United Arab Emirates and Saudi Arabia respectively.

“The demand for management talent far outstrips supply in these markets, meaning companies need to compete with developed economies for talent.

“At the same time, the cost of living is determined by local factors, keeping the relative value of management salaries high,” Kala added.

She said general managers’ spending power appeared to have grown over the past year, even when the inflationary impact of the drop in the dollar was taken into account.

Kala added that the highest growth in spending power usually correlated with a growth in the economy of that specific country.

“However, as the global economic slowdown continues to bite, we anticipate the growth of spending power to slow too,” she said.

She ponted out that it might be exacerbated by rising food cost, petrol and (in some key markets such as the Middle East) accommodation. 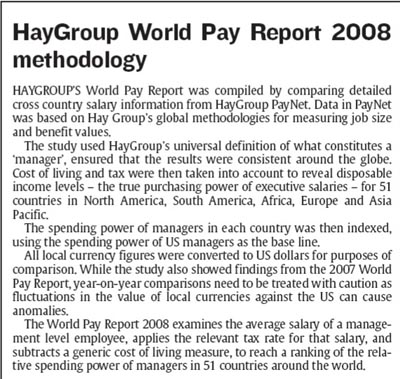