PETALING JAYA: Today is the D-day for independent power producers (IPPs) to pay the first of 12 instalments of windfall taxes to the Government or face penalties.

The IPPs have tried in vain to get a deferment. There are reluctant parties, yet some will still pay even under protest. 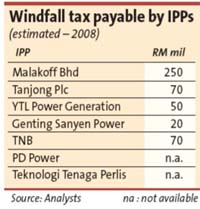 Others are just hoping for a policy reversal so that they can proceed to renegotiate the power purchase agreements (PPAs) rather than pay the levy.

It is learnt that Genting-Sanyen Power, Powertek Bhd (Tanjung Group) and even PD Power (part of Sime Darby Bhd) are working towards handing over their portion of the windfall tax to the Government before the timeline expires.

Details on the other players were not available at press time. 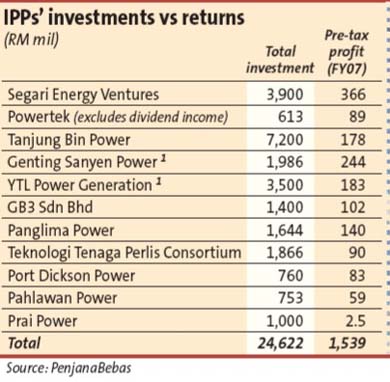 The IPPs have urged the Government to defer the levy but to no avail.

They have also not received a firm date to renegotiate the PPAs although the Government has set up a committee to look into that.

But this is a group, especially the first and second generation IPPs, that have “enjoyed very good returns over the years’’ for their venture into the power industry even though they did take risks initially.

In fact, their internal rate of return, at 18% and 15% for first and second generation IPPs respectively, was much higher than the region’s 5% to 8%, an analyst said.

TNB pays 12.4 sen to 15.5 sen per kilowatt-hour for power bought from the IPPs and the powerhouse has to bear the cost of fuel.

Following the rise in fuel costs, TNB is finding it difficult to bear the cost for the IPPs too. According to a report, the “lopsided PPAs and gas subsidies favouring the IPPs had cost Petronas, TNB, the Government and ultimately the consumer dearly.’’

The Government in June decided it had had enough of grumbling from TNB over rising costs and the “take-and-pay’’ clause that had weighed on the powerhouse for years.

The Government wants all parties to share the risks and returns and slapped the IPPs with a 30% windfall tax on the return on assets of IPPs in excess of the 9% threshold.

TNB has in the past failed to get the IPPs to renegotiate the value of their PPAs downwards but this time around there is an ultimatum from the Government — renegotiate or pay windfall taxes. 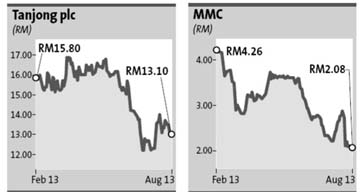 It may appear to be an arm-twisting tactic but it may get the IPPs to the negotiating table.

This signals a landscape change in the power sector, which is not just vital for the industry’s future growth, but mistakes of the past should not be repeated.

The “take-and-pay” clause in many of the PPAs should never have been there in the first place.

It may be unethical to change the rules of the game midway and it does not bode well in the eyes of the foreign investing public but there has been renegotiations of PPAs in the Philippines, the United States, Indonesia, Northern Ireland and even India.

To make the IPPs share the risks they also have to be compensated and the likelihood of an extension to their concession period may be in the offing.

But, in any renegotiations, the consumer’s interest should be taken into consideration so that he is not burdened with higher tariff for a basic utility.

All the IPPs have a concession period of 21 years and the first concession to expire will be YTL Power’s in 2015.

Pending renegotiation, OSK Research Sdn Bhd associate director Chris Eng does not “see much room for growth for the IPPs’’ in Malaysia.

While Malakoff Bhd has been widely said to be the worst affected by the windfall tax, competitor YTL Power will be least affected as its portion is only RM50mil versus Malakoff’s RM250mil in the first year.

Genting-Sanyen, according to an analyst, would pay RM20mil in windfall tax for 2008 and Tanjung Bhd, RM70mil. TNB will pay less than RM70mil.

For the current year, the Government should be able to get RM550mil in levies from the energy sector.

But while TNB also has to pay levy, an analyst said it would still be a “net beneficiary of the windfall levy and tariff hike.’’

Malaysians began paying higher power tariffs beginning July 1 with a rise of 18% and 24% per kilowatt-hour for residential and corporate usage respectively.

Another tariff review is expected on July 1, 2009.