The product was already available in New Zealand and Australia, where it had been a huge success, said general manager for Asia, Campbell Cave.

“Zilch is especially ideal for people with diabetes,” he told StarBiz. 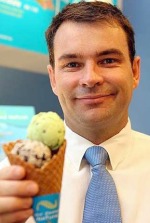 “With the new ice-cream, we will be able to target health and weight conscious customers as well,” he said.

Cave said the Zilch would most likely be available locally in vanilla and chocolate flavours, which were generally the most popular ice cream flavours anywhere.

The New Zealand Natural brand was conceived in 1984. Currently, New Zealand and Australia are its largest markets. The brand is also present in Britain, the US and 10 Asian countries.

The brand was introduced in Malaysia in 2003 and is controlled and managed by three local siblings. Cave said the brand had a small share of the Malaysian market, which had great growth potential.

“The retail infrastructure is good here. There are great malls that are coming up and the Government is committed to building retail tourism.

“The climate is also great. You have 12 months of warm weather and that is fantastic for the ice cream business,” he added.

Cave estimates the annual per capita consumption for ice cream in Malaysia is around one litre per year and growing.

The company presently has 15 outlets in Malaysia – 13 in the Klang Valley and two in Penang.

“We are looking to set up two new outlets in Penang. We have yet to decide on the location for the third outlet,” he said.

“We have expanded quite fast. This year, we want to take a step back to streamline our processes and focus our efforts on moving into the hospitality and supermarket lines.

“We have some exciting plans for the second half of the year which we will reveal in due course,” he added.