Hira Zazalina Zahari wanted to be different from her peers and chose to study computer science, an area that was at one time dominated by males. But this turned out to be a good decision, as she is now owner of a fairly successful web design and animation company.

HIRA Zazalina Zahari, 32, had always wanted to be different from her peers.

At the point of deciding on her undergraduate degree, the option of computer science caught her attention and she decided on the spot to take it up.

“I thought to myself, what a cool name. 'Computer Science' sounded nice and I dove right into it,” she says with a laugh.

Today, this KL-born lass has no regrets making that career choice as she is successfully running her own web design and animation firm, Enershia Sdn Bhd.

As Enershia chief executive officer, Hira admits that when she was growing up, she did not have an ambition. She just knew that she wanted to run her own company.

“I was not like my friends who wanted to be doctors, bankers and in other usual occupations.

“I just knew that I wanted to be manager of my own firm,” she told Starbiz recently.

It was uncommon for girls to take up computer science in the late 90s and Hira was one of the few in the male-dominated class.

“When I was doing my degree at the University of Kent in Britain, people were surprised as not many girls took interest in programming and web design.

“All I knew was that I wanted to do something different,” she adds.

This year Enershia turns five. Hira explains that the company began with web design and related projects, but fully ventured into animation in 2004.

Enershia has been working on animation for the Education Ministry's educational materials as well as the occasional project such as the recent Scientific Excellence in Islamic Civilisation Exhibition late last year.

Hira left university in 1997 and joined several companies, including Esso (now ExxonMobil) as a systems analyst and also got involved in web design and portals.

But, her desire to have her own firm grew stronger and she decided to leave the comfort of her relatively stable job to start Enershia.

It was not a rosy start, she admits. “I never thought it would turn out this way. When I started, I felt like I was in a dark tunnel, wondering when I would see the light,” she says jokingly.

The mother of two is thankful for the support from her family and partner, now husband, Amran Hafiz Affifudin.

Reflecting on her early days, she recalls how she did not pay herself until the company made a profit and how she headed home for meals when she was cash-strapped.

“We took one step at a time. In our efforts to work on a project, we managed to secure the finances and get everything together. I feel that it was a good omen,” she says.

Her sense of adventure and determination to succeed at building the company were among the factors that contributed towards the good track record and reputation Enershia has today.

“I told myself that if I was not able to do this, then I should not. It would mean that I was doing something wrong.”

These traits are certainly ingredients for success as Enershia has grown from a seven-member team to a work force of 25.

Hira, along with Amran and other partner Tajmail Tajuddin, continue to look at improving the firm’s products and further develop them to be on par with those of international standards.

Enershia is embarking on producing animation for a TV series next month targeting children from ages four to six years.

“I like the thrill of seeing a project through and completed. That gives me a lot of satisfaction because every pixel you develop is all about detail and effort,” she remarks.

Also, Enershia’s own team would be writing the content for the TV series, something Hira is very proud of.

“It will be done in an international setting and feature materials on general knowledge.

“We have to teach children to be aware of other countries and languages and we feel that Enershia has the edge to produce animation properties in this niche sector,” she adds.

Keeping the team lean was also important, she feels, as people have different strengths and can contribute to a team as a whole.

The team is small so much so Hira jokingly admits to using her young son as a “guinea pig” for Enershia’s animation products.

“Children don’t lie; I can see his reaction from watching our animation and it is useful feedback,” she laughs.

But ask Hira if she is contented or happy with her success in the last five years, and she strongly says no.

“I could never say that for Enershia, even if we get praises for our work. I can still see areas where we can improve.

“We are behind animation companies from the US, Spain and even South Korea. It is a constant struggle for a Malaysian firm.''

Hira notes that although financing was one of the major challenges in running one’s own business, finding good talent was another issue.

“Our intellectual property is our people and we need to give them more training and exposure.”

It appears that Hira is all gung-ho and not ready to rest on her laurels in this homegrown venture. What she says to budding entrepreneurs is to always, “follow your instincts”.

“If you feel that there is something you have always wanted to do, then go ahead and do it, do not wait and expect it to happen.

“You have got to try, work towards it and don’t bury your instincts, because you will never know and you do not want to regret not knowing.”

Musical animation Over The Moon available in Bahasa Malaysia 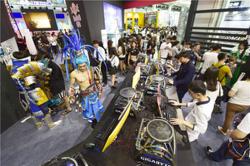