CENTRIO at Pantai Hillpark sold out the first 126 SOHO units in two days of its recent preview!

) as the stylish Spanish-inspired Centrio, with a SOHO (small office home office) concept is probably the first of its kind in the area.

Although the SOHO concept has become increasingly popular in recent years, some of these projects have not been very successful.

So why is the Centrio such a big hit?

My guess is the prime location as it is very near Kuala Lumpur city and has a nearby LRT station, unique concept where no two units are alike, the YTL name and maybe because purchasers want to emulate those who had bought YTL Land’s adjacent Andalucia at Pantai Hillpark that won the FIABCI Malaysia Property Award 2006 for best residential development.

Centrio's achievement is reminiscent of Pantai Hillpark's Phase 1 launch in 1991 when 50% of the 298 units priced from RM152,300 were sold within two days and all units gone by the end of two months.

This kind of “blitzkrieg” sales is quite rare in the current soft property market. Purchasers who thronged Starhill Gallery's Explore floor last week to attend the Urban Sanctuary (an exclusive event showcasing the Centrio) must have realised that they could not go wrong when investing in Pantai Hillpark as its units enjoy more than 100% capital appreciation, and a rental yield of 9 to 10%.

Most of the buyers are professionals and YTL repeat buyers especially those who have bought properties in Pantai Hillpark.

A public relations consultant, who drove me to Andalucia last week to refresh my memory, said she bought a SOHO suite because it fits her single lifestyle. Besides getting 24-hour multi-tiered security her unit will be broadband connected and Wifi enabled.

Every SOHO suite is a duplex and features a two-storey high ceiling or windows, and a powder room for guests.

After a presentation by YTL's senior architect Chong Yee Loon, I realise that this is no ordinary SOHO but one that Chong has put her heart and soul into turning it into an adorable place for one to work, live and play.

Within four months she has not only created SOHO units out of interlocking “cubes” of 3.8 sq metres each (three cubes on the ground floor and two cubes on the upper floor) and stacked them like Lego bricks but also designed interesting outdoor features with cosy corners for meetings under shady trees and rendezvous spots complete with swing lounges, bamboo overhangs and tables with sunken space to put the legs.

Her thrust is on sustainable design, environmentally friendly and security. “Our tagline is multiple choice and no wrong answers,” she said.

There are also sky bridges linking the blocks as well as water features and an almost Olympic-size swimming pool in the centre.

Chong who also designed the Andalucia has also laid the blocks parallel to each other so that the adjacent Phase 1 Pantai Hillpark units would not face Centrio's units directly but see through into the common areas.

The design team has given the retail, office and residential spaces their own access points and parking facilities.

Each of the eight types of SOHO suites boasts of its unique design elements like spiral staircase that leads to an open sun deck above the suite or roof gardens or private sloped lawn with direct access from the unit to parking bay area. One design has a skylight that sits above the stairway while another has balconies that extend the living space to the outdoors. Each suite comes with a solar panel for the water heater.

Centrio's design is modern as compared to Andalusia’s traditional Mediterranean theme (216 units of condovillas priced from RM298,000. It was launched in March 2002 and sold out).

Centrio’s 3.8-acre commercial land was originally meant for shop offices but as YTL Land’s executive director Datuk Yeoh Seok Kian explained the SOHO concept came about when research showed that many young people wanted to work from home that also gave them unlimited flexibility. “That’s why we designed SOHO duplexes in eight varieties, so that they will have many options in terms of space and design. Innovation is the key to success today,” he said, adding that some bought two to three units.

Rainwater is collected in storage tanks and used for watering the landscapes and for other uses, he said.

With the completion of Andalucia, there is now 45 acres left out of Pantai Hillpark's 90 acres. The last phase of 40 acres on a small hill would be for bungalows and semi-detached houses.

YTL Land has partly transformed Pantai Dalam from its squatter and low-cost housing image into one of Kuala Lumpur’s most sought-after addresses. It has helped to spruce up the road to its development but the authorities concerned should also do its part like relocating the unsightly hawker stalls that line the nearby roadsides. 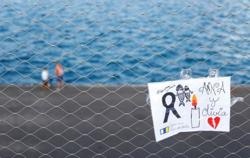