THE Mid Valley City (MVC) development entered another milestone last week with two important events – the signing on of Isetan as the first anchor department store at The Gardens, the second shopping centre in Mid Valley City on July 7 and – the official opening of the Boulevard Hotel the following day.

Yes, Mid Valley City will have another new shopping centre that will run alongside the existing Mid Valley Megamall, but separated by the Signature office buildings. Although only half the size of the Megamall, The Gardens under phase 2 will be more upmarket.

The latest events bode well for the marketing of Mid Valley City's other properties, namely offices and serviced apartments as MVC will become a truly “city-within-a-city” where one can live, work, shop and do practically everything without going anywhere else.

Having a reputable name like Isetan at The Gardens is also an asset as the 100-year-old department store is very popular among Malaysians and tourists. The Isetan store will occupy 150,000 sq ft over four levels and will be its third store in Malaysia. The other two are in Lot 10 (opened in 1990) and its largest store is in Suria KLCC (1998) with 250,000 sq ft over five levels.

has come a long way in seeing its 50-acre flagship Mid Valley City becoming one of Asia’s premier integrated mixed-used developments and a real estate icon in Malaysia.

As IGB group managing director Robert Tan recalled, it had taken almost eight years of planning and interrupted in between by economic crises, to launch phase 1 in 1999.

“Since then, we have seen year-on-year increase in the success of Mid Valley City. This is due primarily to Mid Valley Megamall. Our vision has always been to achieve a fully integrated one-stop city and to reinforce Malaysia's position as a major shopping destination. Hopefully, we can achieve this by the end of this decade,” he said.

Indeed, the Megamall is now one of the top three shopping centres in the country. Its occupancy remains at 100%, with over 26 million visitations in 2004. Analysis showed that 75% of the shoppers came by cars and 25% used public transport.

Tan said IGB was working closely with KL Monorail for a new station at Mid Valley City and also to link the Putra LRT system to MVC via the Abdullah Hukum station.

Many people may have thought that the Megamall and its Signature offices are all that Mid Valley City has, but they are just the first of this four-phased mega project IGB is developing in partnership with Kuala Lumpur City Hall.

Phase 2 on 12 acres will add another 5.9 million sq ft of mixed-used development comprising 1.83 million sq ft of The Gardens with about 200 retail lots (to open in September 2007), a 5-star hotel, serviced apartments and offices. IGB will invest more than RM1bil in this phase over the next five years.

Phase 3 on 3 acres, has the potential for a 1.5 million sq ft space for either a convention centre, or other commercial use.

Phase 4, also on 3 acres, is the Northpoint Office Suites and Residences, and is scheduled for completion by the end of this year. It will add 600 more car park bays. About 30% of the serviced apartments and all of the 204 office suites have been sold.

Will the two shopping centres in one location compete with each other?

IGB’s Tan firmly believes they would complement each other, as The Gardens would have a different concept and different tenant mix. In fact, as Tan put it: “There are many new and exciting concepts being offered by our future retail partners.”

Meanwhile, shoppers will be glad to know that the entire Mid Valley City infrastructure will be upgraded with four new underpasses and an overpass to help ease traffic congestion during weekends and public holidays.

There will be 65% more parking bays with the existing 6,000 increased by another 4,500 bays under phase 2. Cars can move from The Gardens right to Megamall.

It has also invested heavily in the infrastructure, spending RM250mil on phase 1, and another RM150mil on phase 2. This is more than 10% of the RM3.3bil Mid Valley City.

“Mid Valley City is evolving from a shopping centre into a complete integrated urban development. You can live in Mid Valley City and don’t need to go anywhere. It is in the same league as La Defense in Paris and London’s Canary Wharf. We’ve shown how we can turn a run-down urban site into a vibrant new city,” he added.

Indeed when completed, Mid Valley City will have a staggering 15 million sq ft of built-up space, making it one of the largest integrated developments in the world! 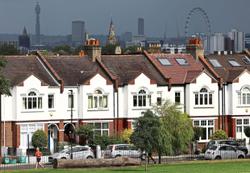