LANGKAWI Lagoon Resort will be expanding its facilities to offer more five-star amenities, including a spa and retail shops over the sea, to position itself as the premier resort in Langkawi.

Developed and managed by subsidiaries of MK Land Holdings Bhd

Phase 1a of the project on 10 acres has been completed with 96 units of hotel suites, 78 sea villas, three bungalows, two sea cottages and a royal suite, at a cost of RM100mil.

The project based on the traditional Malay-style village and its rich architecture design, is dubbed “the perfect place for those who cherish relaxing in an exclusive and luxurious ambience within an island setting.”

Tema Teladan general manager Terence Saw said upon completion in eight to 10 years, the resort would have a total of 1,460 units of various property types with sales revenue of RM861mil.

“New concepts for Langkawi Lagoon are in the pipeline. They are promising and look good and some would be launched soon,” he told StarBiz.

Facilities provided at the resort include a beachfront swimming pool, a man-made beach with landscaped garden, health spa, a riverside restaurant, beach cafes, as well as meeting and function rooms.

Saw said the resort has also been entrusted with the management of the nearby Kuala Melaka River Park and visitors can look forward to the various activities to be organised there including handicraft exhibition, coconut de-husking, local food fare and go-karting.

He said properties to be launched this year include a five-storey commercial complex, six more blocks of 76 sea villas and 200 units of serviced apartments.

The complex with built-up of more than 50,000 sq ft would feature a departmental store, food court and duty free shops.

The scheme, which has been a hit with investors, allows buyers to own holiday homes for their retirement while deriving good investment return from the GRR scheme.

Meanwhile, the developer gets to sell its properties and by leasing them from the owners, it is able to operate the property as a resort.

So far, it has registered an average occupancy rate of about 40% to 50% and according to its sales and marketing director Nazri Abdul Rahman, it was encouraging for a new resort.

“During peak seasons like the recent school holidays, Christmas and Chinese New Year, the occupancy was full.”

Nazri said the resort would be participating in various promotional activities including the Matta Fair in Kuala Lumpur this month and the World Travel Mart in London in June.

“We are vying to attract the incentives, seminars and meetings sectors and would also consider improving our facilities in these areas.”

Nazri said the resort has introduced various promotional packages including the Lagoon Retreat at RM666 for a three days and two nights stay for a couple at the hotel suite and at RM1,111 in a sea villa.

The Family Affair package for a couple and two children is priced at RM808 and the Honeymoon package is at RM988. 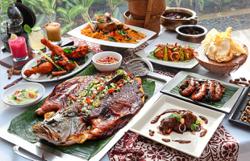