Kota Kemuning Hills: The Jewel in the Crown

THE cover on the invitation card to the official launch of Kota Kemuning Hills on Jan 18 reads: The Fellowship of Elites (a familiar “Ring”?).

As you turn the card you notice expressions like: You are in good company. Like the proverbial birds of a feather, you are among the astute registrants who will soon be able to enter an elitist circle. Many though will be shut out.

It sure makes one feel important to be among “a peerless assembly of kindred minds”. Although I had earlier attended the preview of the Adiva in Desa Parkcity, another high-end development in Kuala Lumpur that Saturday, I was tempted to drive 35km from KL city to Kota Kemuning in Shah Alam via the KL-Shah Alam Expressway (Kesas) to find what Hicom-Gamuda Development Sdn Bhd has to offer for its much-touted Kota Kemuning Hills.

Arriving at the show village at about 7pm, I saw many people being ferried in golf buggies and vans from a parking lot to the Kota Ke- muning Hills entrance, a stone's throw away.

“I have been fetching so many people for the past two hours that I think I must have covered the distance from here to Ipoh,” said the driver of the buggy that took me to the registration counter.

I was handed a form to fill my particulars like all the guests who had come to view the seven show houses (three bungalows and four semi-detached houses) and attended the cocktail garden reception.

The column on total monthly household income caught my attention: just tick the range RM10,000 to RM20,000; RM50,000 and more, etc? Well, what can one expect if you are planning to buy a multi-million ringgit property in this “Jewel in the Crown” of Kota Kemuning. .

People were still streaming in by closing time at 9pm.

The glare of spotlights on the Kota Permai Golf & Country Club unveiled one of the reasons for Kota Kemuning Hill's exclusivity. Its 80-acre precinct is virtually surrounded by the golf course. Running along this “natural boundary” of manicured greens will be a landscaped 2.5-m wide perimeter walkway, cleverly enhanced with planting and foliage to create almost an “extension” of the golf course into Kota Kemuning Hills.

There will be a central parkway. It is a continuous leisure and recreational trail offering five playgrounds, five parks, seven exercise parks, three look-out terraces and park seats every 100m along the 2.8km perimeter trail. Walkways and streetscapes will link this recreational trail to the entire enclave.

There will be 231 homes (146 semi-detached houses and 85 bungalows). The house facades are reminiscent of the plain and unsophisticated designs of Australian homes. The layout and quality finishes befit a high-end product. One must view the show houses to appreciate the designs.

The key design features include a gated and guarded precinct with single-point entry and exit at the gateway entrance, customised vehicle access system, hilltop terracing where the homes sit on contoured terraces at different levels with panoramic views of the golf course, lush landscaping, an intimate community of neighbourhood clusters and cul-de-sac pre- cincts and contemporary designs to give homes the luxury of expansive terraces and courtyards that open out to greens and refreshing views.

Hicom Gamuda Development Sdn Bhd general manager Steven Chu said buyers would also get a free and transferable membership to the Kota Permai Golf & Country Club that was voted the “Most Scenic, Most Memorable and No. 1 Golf Course in Malaysia by Golf Malaysia Poll 2001/2002.

Kota Kemuning also won the coveted “Planning, Innovation and Concept Award 2000” from the Malaysian Institute of Planners for excellent township planning and infrastructure.

Despite the slowdown in property sales in the country, Chu is confident that Kota Ke- muning Hills would be eventually sold out as it offers a quality property in a choice location.

Although some people may perceive Kota Kemuning to be a bit far from the city centre, its accessibility can be quite enviable. The Gamuda group has spent some RM90mil to build its own dedicated interchange to Kota Kemuning from the Kesas Highway.

As part of its goodwill, it is offering free land for the construction of a second interchange from Kesas to link up the township and its neighbour Bukit Rimau.

“We've spent about RM12mil on the show houses and landscaping. It is part of our philosophy to spend money upfront to show purchasers what we are offering,” Chu said, adding that the township had lots of amenities, including a 22-acre clear water lake, 25-acre park surrounding it, and an 8km walkway.

Chu said those who had bought houses in Kota Kemuning had seen the values of their properties go up.

He said 60% to 70% of the buyers were from nearby Subang Jaya who had upgraded from link houses. Some are from Shah Alam and Klang. Kota Kemuning residents enjoy toll-free rides along the Kesas Highway.

While some township developments have faltered since the mid-1997 recession, Gamuda's Kota Kemuning flagship has done well.

It has netted some RM2bil sales out of RM3.2bil gross development value since 1996. 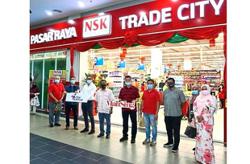