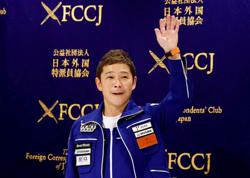 WASHINGTON (AFP): Japanese billionaire Yusaku Maezawa (pic) announced Thursday (Dec 8) eight crew members who will join him for a journey around the Moon planned for 2023 on a SpaceX rocket that is still under development.

The mission, known as dearMoon, was first announced in 2018. Maezawa initially said he would invite a crew of six-to-eight artists, but later changed the entry requirements to a competition which applicants could apply for online.

There were also two backup crew members: snowboarder Kaitlyn Farrington of the US and dancer Miyu of Japan.

"I hope each and every one will recognise the responsibility that comes with leaving the Earth, travelling to the Moon and back," Maezawa said in an announcement video on YouTube.

"They will gain a lot from this experience, and I hope they will use that to contribute to the planet, to humanity."

According to a mission profile graphic on the dearMoon website, the round trip would last almost six days and circumnavigate the Moon without landing.

When completed, SpaceX's Starship will be the most powerful rocket ever built.

Although its upper stage has succeeded in test flights within the atmosphere and successfully landed, SpaceX has yet to carry out an orbital test flight -- something founder Elon Musk has repeatedly promised will happen by the end of 2022.