He made the announcement during the closing ceremony of the 3rd National Games and 1st Paralympic Games 2022 at Moradok Techo National Stadium on the night of Nov 30.

“I wish to inform my compatriots all over the country that in the coming Khmer New Year, we will hold the Angkor Sangkran again,” he said.

Chhot Bunthong, a researcher at the Royal Academy of Cambodia and philosophy expert, said on Dec 1 that all traditional events like Angkor Sangkran are important as they are unique cultural treasures of the Khmer people.

He said these festivals are meant to revive Cambodian traditions and customs. In addition, their re-emergence teaches both local people, as well as international tourists, valuable lessons about the Khmer culture.

Bunthong added that they are also a great opportunity to educate the young about the values, traditions and customs of Cambodia.

“If these events are held in tourist areas such as Siem Reap province, all Cambodians and foreigners who witness the spectacle will spread the word about it. This in turn will attract more visitors,” he said.

Cambodia would gain prestige from this, and the more its international reputation grew, the more tourists would travel to the Kingdom, bringing benefits to the hospitality industry, he added.

Siem Reap provincial deputy governor Ly Samrith said he was aware that the Sangkran would return, but no firm plans had yet been laid. 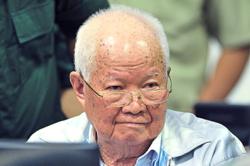