DILI (AFP): Timor-este inaugurated a new deepwater port on Wednesday (Nov 30) operated by a French conglomerate, in the largest ever single foreign investment on an infrastructure project in South-East Asia's youngest country.

The US$490 million port at Tibar Bay near the capital Dili is expected to expand trade for Timor-Leste one of the poorest countries in the region.

"It was necessary for Timor-Leste to be connected to the main shipping lines in Asia," French transport giant Bollore's director of ports Olivier de Noray told AFP.

The port will be able to receive ships of more than 8,000 containers, he said, and vessels sailing from Singapore through the Indonesian archipelago to Australia will be able to call there.

Timor-Leste, which gained independence from Indonesian occupation in 2002, already has a port in Dili but it is not deep enough to accommodate large container ships.

The new project, which took four years to complete, is being operated under a 30-year public-private partnership agreement.

Timor-Leste will contribute $135 million and Bollore $155 million for the initial phase of the project, according to the local government.

The port started operations in September and was inaugurated at a ceremony on Wednesday.

It will become the largest private employer in the country with more than 300 jobs, according to Bollore.

Its construction in a bay bordered by mangroves with a partially damaged coral reef and sea turtles has raised concerns about risks to the environment.

Bollore said it is working with a local NGO on environmental protection projects. 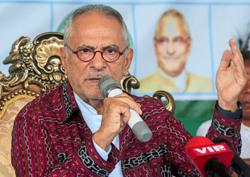