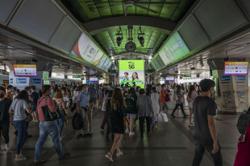 Potong, which serves Thai-Chinese cuisine from a shop house that was once a pharmacy in Bangkok’s China town. - gastrofilm, dofskyground/Potong)

Potong, which serves Thai-Chinese cuisine from a shop house that was once a pharmacy in Bangkok’s China town, and contemporary Thai restaurant Baan Tepa were among the five winners of one-star rating this year. Neo-Indian restaurant Haoma, Maison Dunand and Signature, which serve French cuisines, also made it to the list.

The sixth edition of Thai ratings, take the roster of Michelin star awarded restaurants to 35 with six of them placed in the two-star category. But no Thai restaurant has managed to win the most-coveted three stars so far.

Michelin’s restaurant reviewers anonymously award stars based on creativity, quality and service. Three stars are given to restaurants where the cuisine is akin to art and "worth a special journey,” two stars are given to those "worth a detour,” while one star is awarded to establishments that are considered good restaurants in their category, according to Michelin.

"Thai fine-dining restaurants are particularly blossoming with a variety of cuisines,” said Gwendal Poullennec, international director of Michelin Guide. "The future of the restaurant and hospitality sectors in Thailand look pretty exciting.”

The new edition of the Thailand guide covers a range of culinary experiences, from street food stalls to fine-dining outlets, across all six regions of the country.

"The government has placed great importance on promoting gastronomy tourism,” Anucha said in a statement. "Recognition from the Michelin Guide Thailand is a way to attract both Thai and foreign tourists.”

Thailand is set to welcome more than 10 million tourists this year and expects arrivals to more than double next year as a recovery in global travel gains momentum with the end of pandemic-era restrictions.