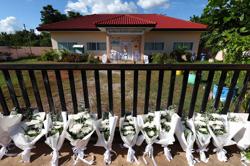 Portraits of child victims are displayed at the top of their coffins for the funeral rituals at the Wai Si Uthai temple in Na Klang in Thailand's northeastern Nong Bua Lam Phu province on Oct 7, 2022. - AFP

UTHAI SAWAN, Thailand (Reuters): It was nap time at Uthai Sawan Child Development Centre in northeastern Thailand and 24 children aged 2 to 5 years were bedded down at evenly spaced spots on the wood-panelled floor.

All seemed calm until an ex-cop armed with a gun and knife stormed into the daycare centre, with on duty staff unable to stop him. The former police sergeant shot at the door of the room where the children slept and killed 22 of them, mostly with a knife, in a rampage that resulted in one of the worst massacres of children by a single killer in recent history.

Among those who died were twin boys Worapat and Weerapol Nuadkhao who were a month away from their fourth birthday.

"They wanted to have cakes, chocolate and strawberry. They were twins but they didn't like the same things," their mother, Pimpa Thana, told Reuters via phone.

"I don't know what to do next," she said, her voice shaking.

Two-year old Kritsana Sola, who loved dinosaurs and football was "so happy" to go to daycare everyday to play with friends and toys, his aunt said.

"He got to dress up nicely in a uniform...Sometimes he was allowed to wear a Chelsea football jersey, that was his favourite," said Naliwan Duangket, showing on her phone a picture of the chubby-faced boy who was nicknamed 'Captain'.

The daycare facility is a trusted go-to for families in nearby villages, with around 90 children usually attending daily, said municipal official Jidapa Boonsom who works in an office next door.

Parents drop the kids off at 8am for a morning filled with learning activities like reading, colouring, and playtime. Lunch is followed by a nap and students are meant to be washed and ready for pick-up soon after at 2.30pm, Jidapa said.

Just over a month ago, the class had gone on its annual field trip. In pictures of the trip posted on social media, the children are dressed in red shirts and black shorts, sneakers, some with their hair in pigtails and others with their sports caps on backwards.

In one photo, the children fold their hands in prayer while listening to a tour guide outside a temple. In another, they sit at the foot of a model dinosaur in a museum, looking up in awe. They are seen laughing, pulling faces, and posing with their teachers on the school bus.

On the day of the attack, heavy rains meant fewer children had been dropped off at the daycare. Only two of them survived.

Television broadcaster Amain TV reported that one of the survivors, a girl named Honey, was sleeping, covered with a blanket, at the far end of the room.

Her grandfather rushed to the scene to find a teacher holding the girl in her arms, covering the child's face with a cloth so she couldn't see her dead friends.

'It's a miracle,' the grandfather, who was not named, told the broadcaster.

Former policeman Panya Khamrap, 34, killed a total of 37 people, including his wife and son at home before turning the gun on himself, in a massacre that has shocked the nation. 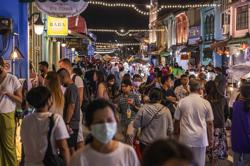