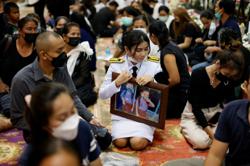 Officials prepare a red carpet leading to the nursery ahead of the arrival of Thailand's King Maha Vajiralongkorn in the northeastern Nong Bua Lam Phu province on Oct 7, 2022. - AFP

BANGKOK (AFP): The Thai king will on Friday (Oct 7) visit survivors of a gun and knife attack on a nursery that left at least 37 people dead, most of them young children.

Thailand has begun mourning one of its deadliest mass killings, with flags on government buildings flying at half-mast.

Former police officer Panya Khamrab stormed the children's nursery armed with a knife and gun before later killing his wife and child, and taking his own life.

Overnight rescue workers delivered coffins to a hospital at Udon Thani and autopsies are scheduled for Friday morning.

The 34-year-old gunman was a former police sergeant suspended in January and sacked in June for drug use.

Police said he was due to face a drugs trial on Friday. 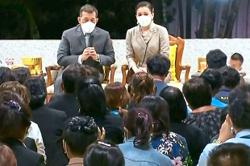 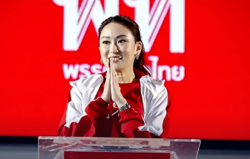