Meet Nuan, the friendly feline from Thailand and adding the feel-good factor to Apec 2022 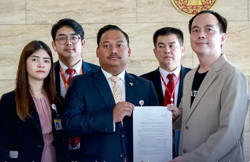 Nuan”, a cat from the Foreign Ministry’s compound, became an internet sensation last week after photos of her posing against the Apec 2022 banner were posted on the ministry’s Instagram (@mfa_thailand).

BANGKOK, Oct 3 (The Nation Thailand/ANN): “Nuan”, a cat from the Thai Foreign Ministry’s compound, became an internet sensation last week after photos of her posing against the Apec 2022 banner were posted on the ministry’s Instagram account.

The photographs were captioned: “Nuan’s mission this week is to promote the press conference of the Asia-Pacific Economic Cooperation [Apec] Meeting 2022 in Thailand, held under the concept ‘Open. Connect. Balance.”

The cat’s photographs, meanwhile, have been liked and widely shared by netizens touched by her cuteness and “her request” for Thais to support the summit. One of the captions reads: “Let’s be good hosts of this event, which will help attract investors and promote tourism in the post-Covid-19 era.”

Ministry spokesman Tanee Sangrat said on Sunday that Nuan is often seen roaming around the Information Department’s building in the Foreign Ministry complex on Rama VI Road. She is very friendly and comes down to greet reporters during a press conference.

Tanee said the ministry plans to use the cat as an unofficial mascot of the Apec summit, hoping to capture its mass appeal to add colour to the event as well as raise public awareness.

Previously, the ministry used a dog as an unofficial mascot for the 2003 Apec summit. The dog lived in the ministry’s compound until it died in 2014. - The Nation Thailand/ANN