HANOI (Vietnam News/Asia News Network): Vietnam welcomed about 1.87 million international arrivals in the first nine months of this year, 16.4 times higher than the same period last year but down 85.4 per cent compared to the same time in 2019 before Covid-19 broke out, according to the General Statistics Office (GSO).

In September alone, the country saw nearly 432,000 foreign visitors, down 11.2 per cent over the previous month.

International arrivals by air reached nearly 1.66 million, accounting for 88.6 per cent of the total.

The country still aims to welcome 5 million international visitors in 2022, with foreign tourists' peak season in the later months of the year. Vietnam reopened borders in March this year, with all Covid-19 restrictions such as vaccination status, proof of negative tests or mandatory quarantines dropped.

Recently, the Vietnam National Administration of Tourism (VNAT) has coordinated with the social media network TikTok and the Vietnam Tourism Association to introduce 'Ngan nga Vietnam', which calls on users to discover the beauty of traditional music, celebrate culture and share national pride, thereby contributing to promoting Vietnam's tourism.

The Mekong Tourism Forum 2022 will be held during Nov 9-14 in the central province of Quaang Nam, focusing on the recovery of tourism, giving an opportunity to travel firms to connect and introduce the culture, people and tourism of Vietnam to countries in the greater Mekong sub-region. 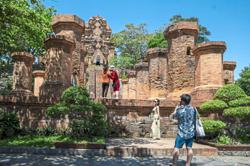