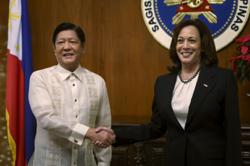 Residents in Marikina city, a suburban of Manila, carrying their family pets to an evacuation centre amid heavy rain brought by Super Typhoon Noru in the Philippines on Sept 25, 2022. - AFP

BANGKOK (The Nation/Asia News Network): The super typhoon Noru, which is barrelling towards Vietnam, will bring heavy to very heavy rain to most parts of Thailand.

The Thai Meteorological Department issued a warning on Monday (Sept 26)., saying Noru was moving westward from the middle of the South China Sea after making landfall in the Philippines. It is expected to hit Vietnam on Wednesday.

The super typhoon, together with the strengthening monsoon prevailing over the Andaman Sea, Thailand and the Gulf of Thailand will bring heavy to very heavy rain to the North, Northeast, Central region including Greater Bangkok, the East and the South from Wednesday to Saturday.

People in these areas are warned against flash floods and overflows, especially along waterways near foothills and lowlands, and are advised to keep up with weather updates.

The department has also forecast 2 to 3-metre-high waves from Tuesday to Saturday in the Andaman Sea and upper Gulf, which will become higher under thundershowers.

Waves in the lower Gulf will be about 2m high and higher in thundershowers. Ships have been advised to proceed with caution, while small boats in the Andaman Sea and upper Gulf have been told to stay ashore.