Duo climb atop shophouse to escape raid in Geylang, leaving behind drugs and samurai swords 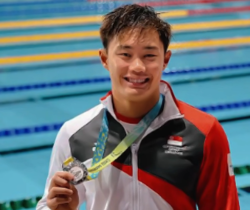 A total of 71 suspected drug offenders were arrested in an island-wide drug operation from Sept 19 to 23. - CNB

SINGAPORE (The Straits Times/Asia News Network): Two people were arrested after climbing onto the rooftop of a shophouse in Geylang to try to escape a raid by officers from the Central Narcotics Bureau (CNB).

In their haste, the 36-year-old Singaporean man and 38-year-old female permanent resident of Singapore left behind drugs and samurai swords.

In a statement on Friday, CNB said the raid was part of a five-day islandwide operation, which saw 71 people arrested for suspected drug offences.

CNB officers had tried to enter the two-storey shophouse on Tuesday at about noon.

"Despite repeated warnings by officers, the occupants of the unit refused to open the door."

"Officers observing the unit then spotted them climbing out of the unit's window onto the rooftop to evade arrest," said CNB.

The man then climbed into another unit, where he was arrested, while the woman was apprehended on the rooftop.

Both are believed to be drug users.

Officers seized 12g of crystal methamphetamine, or Ice, and various drug paraphernalia from the unit they had escaped from.

The islandwide operation between Sept 19 and 23 led to the seizure of 158g of heroin, 77g of Ice, 90g of cannabis, 1g of new psychoactive substances, 28 Erimin-5 tablets and 15 bottles of liquid suspected to contain gamma-hydroxybutyrate (GHB).

CNB officers had searched parts of Singapore including Bedok, Kallang and Tampines.

Superintendent Lee Pin How, the commanding officer who led the operation, said: "Drugs have no place in our society - they have a devastating impact on individuals, families and communities.

"While under the influence of drugs, abusers put themselves and others around them at risk.

"Despite the danger that my officers face on the job, they remain dedicated to keeping drugs off our streets and our community, especially the young and vulnerable from the menace of drugs."

Anyone found guilty of trafficking more than 15g of pure heroin or 500g of cannabis, may face the death penalty. 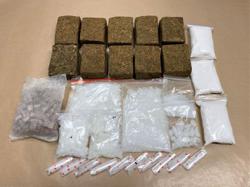