MANILA (The Straits Times/Asia News Network): Philippine President Ferdinand Marcos Jr (pic) is set to fly to Indonesia and Singapore in early September, following in the tradition of past leaders who visit South-east Asian nations for their first official trip.

Marcos' press secretary Trixie Angeles-Cruz said on Friday (Aug 19) that the President will first visit Indonesia from Sept 4 to 6, before heading to Singapore from Sept 6 to 7.

"We look forward to welcoming President Marcos to Singapore," a spokesman said.

In May, Halimah had sent her congratulations to Marcos after he won the presidential election.

"I recall fondly the warm and gracious hospitality extended to me by the Filipino people during my state visit to the Philippines in September 2019. I look forward to working with you to strengthen the friendship between our two countries," Halimah had written.

Prime Minister Lee Hsien Loong had likewise congratulated Marcos and noted the "deep and longstanding ties" between Singapore and the Philippines.

"As fellow founding members of Asean, we share a similar outlook on key regional and global developments, and work closely to promote regional peace and prosperity," PM Lee said.

Marcos is also expected to visit the United States, which counts the Philippines as one of its oldest treaty allies in Asia, at a later date.

He said in June that he is keen to attend the United Nations General Assembly, set to be held in New York from Sept 13 to 17. 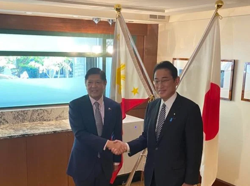