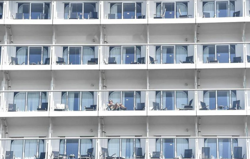 SINGAPORE, Aug 14 (The Straits Times/ANN): Singapore is adopting a new method to better monitor the amount of moisture in the atmosphere, a move that could boost the weatherman's ability to predict severe weather and thunderstorms amid climate change.

Unlike current methods that give limited and localised readings, the new method allows the Meteorological Service Singapore (MSS) to monitor moisture continuously throughout the entire atmosphere by using satellite signals.

As air moisture distribution in the atmosphere influences rainfall, the continuous stream of data could help the MSS better predict the weather, which is expected to turn erratic with global warming.

The new method, which will be used from late August, makes use of satellite signal readings from 10 so-called reference stations dotted across the island.

These ground stations receive satellite signals and are being used to help determine the positions of people and vehicles to make navigation more reliable.

The distribution of moisture in the atmosphere determines whether an air column is stable or unstable, said weather and climate scientist Koh Tieh Yong of the Singapore University of Social Sciences. An unstable air column leads to rain and storms, he explained.

MSS uses an islandwide network of sensors on the ground to measure air moisture near the surface of immediate areas around the sensors.

The MSS also releases a weather balloon twice a day to track conditions higher up in the atmosphere, up to 37km in the air. Its measurements of wind speed, temperature, air pressure and moisture can inform the MSS of the weather over large areas of the island.

However, under rapidly changing conditions such as the convergence of winds over Singapore, the balloon's readings taken over the eastern part of the island may not match what is happening in the western part, for instance.

The new method is aimed at plugging this gap. It is also less expensive than weather balloons to run.

NEA, which oversees the MSS, has one station that will be added to SLA's network. Two more stations will be running by the end of this year.

Using satellite signals to measure the amount of water vapour in the air is not new. Japan, for instance, has been using the method to forecast its weather for more than a decade, said Associate Professor Koh.

NEA said it will conduct exploratory studies to find out if the additional air moisture data can help to better forecast thunderstorms.

Apart from moisture, other elements that are key to forecasting storms include wind, temperature, atmospheric stability and large-scale weather patterns.

Commenting on the new method, Prof Koh said it is unlikely to lead to quantum improvements in Singapore's weather forecast.

"In Singapore, a typical tropical thunderstorm blows past within one hour. To improve a forecast of such a storm three to 24 hours ahead, the (atmospheric moisture) data needed must be monitored to a range of about 100km to 700km, mostly outside of Singapore," he noted.