The Department of National Parks Wildlife and Plant Conservation is currently on the lookout for a foreign man who was caught on video catching parrotfish at Hat Noppharat Thara-Mu Ko Phi Phi National Park in Krabi province.

A TikTok video clip of the foreigner showed him catching three parrotfishes, one moray eel and two other unidentified fish in the sea off Thailand, leaving Thai netizens outraged on Thursday.

Most netizens slammed the foreigner, saying that his actions were against the law and destroyed the marine ecosystem.

They also called on government agencies to take legal action against the foreigner and the boatman.

He said Hat Noppharat Thara-Mu Ko Phi Phi National Park and Marine and Coastal Resources Office 10 had collected evidence and compared it with the video clip on the TikTok account @roslanofficial, which features a number of adventure-themed videos.

“The officials are currently searching for the suspect to take legal action against him,” he said. — The Nation/ANN 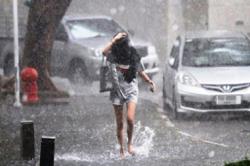