Half of China’s provinces are sticking to their commitments on regional economic growth targets for this year, even as Beijing has softened its tone on achieving the broader national target.

Meanwhile, analysts are pointing out how difficult of a challenge this could be for local bureaucrats to achieve.

As bolstering economic growth has moved higher on the political agenda in the lead-up to this autumn’s once-a-decade leadership reshuffle, China’s largest economies are doing everything they can to toe the party line. This includes making greater efforts to stabilise inbound foreign investment, trade and private business for the rest of the year while also boosting infrastructure spending.

A total of 16 of the nation’s 31 provincial-level jurisdictions, including major municipalities and autonomous regions, have vowed to ensure or strive to achieve their annual socioeconomic development targets that were set earlier this year, according to statements available on their regional websites.

Six other provincial regions said they remained mindful of their economic growth targets but did not go as far as outright saying these would be attainable.

‘No slackness’: China ‘insists’ on zero-Covid despite economic headwinds

Those statements came both before and after last month’s half-year, tone-setting meeting of the Politburo, when China’s primary decision-making body, led by President Xi Jinping, avoided any mention of the nation’s “around 5.5 per cent” economic growth target for 2022.

A vocal contingent of analysts and economists had been contending before the meeting that the target is already out of reach.

Still, the central government urged economically strong provinces to take the lead in driving national growth in the second half of 2022, adding that capable provinces should keep striving to achieve their annual targets.

That was widely viewed as a political mobilisation order that showed how Beijing was not only keen on achieving a certain level of growth, but that boosting the economy would be a key metric in evaluating the political performances of local officials in major regions ahead of the 20th Party Congress.

“For now, it is somewhat difficult for major economic provinces to achieve their annual economic growth targets,” Sun Binbin, chief fixed-income analyst at Tianfeng Securities, warned in a note on Sunday.

Sun said that, based on the growth rates in the first half of 2022, provinces that are major economic drivers might have to achieve a gross domestic product growth rate of around 8 per cent or even higher in the July-December period to meet their annual goals.

The central authorities have not publicly said what constitutes “economically strong” regions, but these are commonly believed to include Shanghai, Beijing and the provinces of Guangdong, Fujian, Jiangsu, Shandong and Zhejiang.

Those seven regions together accounted for nearly 46 per cent of the national economic output in the first half of the year. But among them, four registered a lower economic growth rater than the national average from January-June.

Shanghai, Beijing and Jiangsu even experienced contractions of 13.7 per cent, 2.9 per cent and 1.1 per cent, respectively, in the second quarter, due largely to the impact of coronavirus outbreaks and lockdowns.

Chinese Premier Li Keqiang convened a meeting with local heads of five coastal regions earlier last month, calling on them to “exhaust all means” to stabilise production and employment and to lead the way in the nation’s economic recovery.

Lu Zhe, chief macroeconomist at Topsperity Securities, said the eastern provinces were a major drag on national economic growth in the year’s first half.

“Only when the five provinces and two cities in the east continue to make efforts in the second half of the year, and the economic growth rates are significantly higher than that in the first half, can the national economy ‘strive for the best outcome’,” he said in a note on Wednesday, referencing the Politburo’s directive last month.

Shanghai’s party chief, Li Qiang, inspected major construction projects in the city on Thursday, as the country is relying heavily on infrastructure to drive economic growth. And on the same day, Shanghai Mayor Gong Zheng had a virtual meeting with the CEO of oil giant Saudi Aramco and said the Chinese economic hub will provide an efficient business environment for all kinds of enterprises to develop, according to the official Jiefang Daily.

The provincial government of Guangdong, China’s largest economy and a trade powerhouse, said on August 1 that it would promote exports while expanding imports; speed up the smooth flow of trade routes with Hong Kong; and spare no effort in helping foreign trade firms secure orders and access the market.

And on Saturday, Chinese commerce minister Wang Wentao visited an array of foreign and private companies in Suzhou, Jiangsu province.

“[We will] unswervingly promote a high level of opening up and create a good institutional and policy environment for companies.” 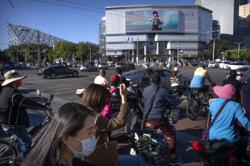