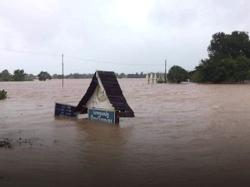 VIENTIANE (Vientiane Times/Asia News Network): A tropical depression will pass over Laos until Aug 13, bringing thunderstorms, heavy rain and strong winds, putting some provinces at risk of flooding and landslides, the Meteorology and Hydrology Department has warned.

During Aug 9-10, thunderstorms and torrential rain with gusting winds can be expected in the southern provinces of Attapeu, Champassak, Xekong and Saravan.

People should prepare to move their belongings and animals to safe places in the event of flooding, and they should keep track of weather forecasts over the next few days.

The meteorology and hydrology station on the Mekong river in Luang Prabang province measured the river level at 10.44 metres on Aug 9, and it is predicted to rise to 10.60 metres on Aug 10 and to 10.87 metres on Aug 11.

The warning level at this point is 17.50 metres and the danger level is 18 metres.

The warning level in this area is 11 metres and the danger level is 12 metres.