JAKARTA (The Straits Times/Asia News Network): Indonesia hopes to start supplying chicken to Singapore by next week after getting approval from the Singapore Food Agency (SFA).

The latter said in a Facebook post last week that Indonesia has been approved as a new source of frozen, chilled and processed chicken.

A source from CPI said it will send 50,000kg of frozen chicken from Jakarta by sea on July 12. "More will come by the end of the month," the source told ST, adding that the company will deliver another batch at around the same volume of the first.

Indonesia has never sold chicken to Singapore, and has so far exported only salted eggs, totalling about 50,000 each month to its close neighbour.

South-East Asia's biggest economy supplies day-old chicks to some regional peers, such as Vietnam and Myanmar, and also exports frozen and processed chicken to several other countries, including Japan and Timor-Leste.

Over the past few years, Indonesia has experienced an oversupply of chicken, with production at about 15 per cent greater than domestic demand prior to the Covid-19 outbreak. The situation worsened during the pandemic as the surpluses hit 48 per cent in 2020 and 36 per cent in 2021.

Dr Nasrullah, who goes by only one name, said Indonesia will produce 3.88 million tonnes of chicken meat this year, more than its domestic demand, and the surplus will serve as "an asset to promote its products overseas".

"We hope this is a good initial step into cooperation between Indonesia and Singapore, with Indonesia being able to fulfill the demand for poultry products from all Singaporeans."

Japfa's corporate affairs director Rachmat Indrajaya told ST: "We... are optimistic that we can fulfill Singapore's demand and standard as Japfa always pays attention to quality, starting from poultry breeding to product processing.

"Our products are also internationally certified."

The company did not elaborate on when it will begin deliveries to Singapore.

The Republic is trying to diversify the sources of its chicken supply after Malaysia banned exports on June 1 to stabilise its domestic production and prices.

Malaysia has allowed its poultry producers to sell live kampung chickens to Singapore from June 14 and resume sale of black chickens from June 18. But the exports of the more popular and affordable broiler chicken - which constitutes the majority of the Republic's chicken imports from Malaysia - are still prohibited.

Singapore imported around 34 per cent, or nearly 73,000 tonnes, of its chicken supply from Malaysia last year, according to SFA figures. The Republic also buys chilled and frozen chicken from other countries, such as Australia, Brazil and Thailand.

Responding to questions on Singapore's efforts to expand the number of approved countries for poultry imports, Minister for Sustainability and the Environment Grace Fu told Parliament on Monday (July 4) that food safety remains paramount.

"Only accredited sources that meet Singapore's food safety and animal health standards will be allowed to export to Singapore. This has not hindered our diversification efforts. Specifically for chicken, 25 countries are accredited."

Dr Nasrullah said another 12 Indonesian establishments have submitted applications for assessments by the SFA, and expect that they can start exporting soon. 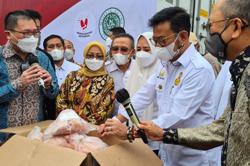