BANGKOK, July 5 (Reuters): Most Asian equities edged higher on Tuesday on signs of thawing China-US tensions, while the Philippine peso outperformed currencies in the region on bets of further interest rate hikes after data showed a spike in inflation.

Stocks of trade-reliant Asian countries like the Philippines, South Korea and Indonesia surged between 1.7% and 1.9%.

Uneasy Asian equities got some relief from a report that US president Joe Biden was leaning towards a decision on easing tariffs on goods from China. China's commerce ministry said Vice Premier Liu He had a "constructive" exchange via a video call with US Treasury Secretary Janet Yellen on Tuesday.

"Tariff lifting will more likely be for the more inflation-sensitive goods, so on balance it should be positive for Asian equity markets, as it should help facilitate trade," said Mitul Kotecha, senior EM strategist with TD Securities.

"But it comes against a backdrop where global trade is declining and Asia trade patterns are also worsening."

Rising oil and gas prices boosted energy stocks in Indonesia, the region's major energy exporter, with the benchmark index climbing 1.7% and set to mark its best session in over two weeks.

The baht pared losses to trade flat and the peso rose as much 0.2%, while most Asian currencies were largely trading lower against a strong dollar. Philippine consumer prices in June were 6.1% higher than a year earlier.

That inflation rate in Thailand was the highest in nearly four years and cemented expectations for more interest rate rises. It also increased the prospect of the central bank acting more aggressively to temper price pressures.

The narrowing gap between Philippines and U.S. interest rates has weighed on the peso, which is trading near a 17-year low against the US dollar.

Thailand's headline consumer price index (CPI) jumped 7.66% in June from a year earlier, a stronger increase than expected, driven up by higher energy prices, compared with a forecast for a 7.50% rise in a Reuters poll.

"The baht and peso are certainly off the lows as above-forecast core inflation may spur the central bank in Thailand to hike rates, and surging inflation numbers in the Philippines have also solidified expectations for more interest rate hikes," added Kotecha.

In South Korea, consumer prices were 6.0% higher in June than a year earlier. The annual rise was the fastest since 1998 and fanned expectations the central bank could deliver a 50 basis point rake hike next week.

Nonetheless, the inflation rate was not much higher than expected. Stocks in Seoul rose as much as 1.9%, rebounding from a 20-month low, while the won slipped 0.3%. - Reuters 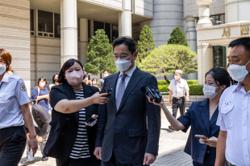