A photo of the relics provided by the Korea Cultural Heritage Foundation. - Laotian Times

Champasack’s Hong Nang Sida Temple, which is believed to have been built in the 12th Century, is the site of the discovery of hundreds of artifacts.

These excavated relics include gold jewelry, crystals of several colours, and a 17th-century statue of the Buddha made from silver.

Deputy head of the Korea Cultural Heritage Foundation, Jeon Yu-geun, said that because many of these relics were made from materials which are not available near the temple, they were likely brought to the temple from afar. Finding this many artifacts at once is extremely rare.

The relics were found in the center of the cross-shaped Khmer temple, inside of a 4.5 meter deep “central pit.” While central pits are features of Angkor and Bayon temples in Cambodia, this is the first pit of its kind to be found in Laos.

Suanesavanh Vignaket of Laos’ Ministry of Information, Culture and Tourism, emphasized the value of these artifacts to understanding Laos’ metal working techniques and trade history.

The silver Buddha figure was apparently one of the last items placed in the temple’s central pit before the temple collapsed. The investigation team will now evaluate the statue and conduct radiocarbon dating on it in order to better understand when the temple caved in.

This discovery is part of an on-going larger effort by the Korean Cultural Heritage Foundation to explore and restore Hong Nang Sida temple. The foundation has also restored the temple’s pavilion. 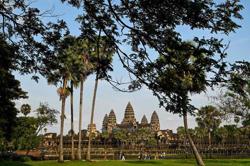