SINGAPORE, July 2 (The Straits Times/ANN): The Republic's fight against dengue is set to receive a further boost, as community-led efforts to educate residents on ways to prevent and protect against it are ramped up.

This comes as the nation is facing a serious dengue situation. Close to 18,000 cases have been reported so far this year, over three times the 5,258 cases last year.

In the first half of this year, about 389,000 dengue inspections were conducted islandwide, with the National Environment Agency (NEA) uncovering about 10,800 mosquito breeding habitats.

About half of the breeding habitats of the Aedes mosquito - which spreads the dengue virus - detected across the island have been in homes, with the figure rising to 60 per cent in dengue cluster areas, NEA said in a joint statement with the People's Association (PA) on Saturday (July 2).

"Although the numbers in recent weeks have shown a decline, the risk of transmission remains high as there are still more than 300 dengue clusters across the island. The weekly number of cases is still very high, exceeding 1,000 cases, and we are in the early months of the traditional peak dengue season in Singapore," NEA said.

As the nation ramps up its fight against dengue, some 5,000 volunteers from the PA grassroots organisations and PA Community Emergency Response Team (Cert) will join NEA's SG Clean Ambassadors in conducting house visits in dengue cluster areas over the next two weeks.

They will be sharing information and tips with residents on how to prevent mosquito breeding and how to better protect themselves.

These complement ongoing house and ground inspections by NEA officers.

Baey also thanked the volunteers for their support in ramping up dengue prevention awareness to stem the surge in dengue cases.

Since the launch of NEA's National Dengue Prevention Campaign on March 30, grassroots organisations have provided strong support, with more than 500 outreach activities.

Over 300 of NEA's SG Clean Ambassadors have been mobilised at close to 100 locations across Singapore to educate residents on ways to prevent and protect against dengue, NEA said.

Since the start of the year, NEA has been working closely with partner agencies and grassroots organisations to stem the spread of the virus, engage stakeholders and mobilise people in the community.

For example, the National Dengue Prevention Campaign 2022 was brought forward ahead of the traditional mid-year peak dengue season and a new purple-coloured banner was introduced to raise awareness at areas with persistently high Aedes aegypti mosquito population.

Many grassroots organisations have stepped forward to join in the fight against dengue by raising awareness among their residents, NEA said.

Ng Shi Ying, 27, who has been living in Boon Lay for over 20 years, said that though her family members have not experienced a single dengue case, they continue to take precautions, such as clearing the water in their pots. - The Straits Times/ANN 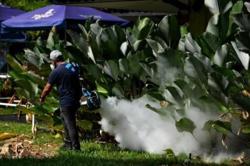