In Kyiv, Jokowi seeks to limit excesses of war Show of unity: Jokowi and Zelenskyy shaking hands during a press conference in Kyiv. — AFP

PRESIDENT Joko “Jokowi” Widodo met with Ukrainian President Volodymyr Zelenskyy in Kyiv, Ukraine in an effort to find ways to alleviate some of the pressure the war has put on the global economy.

Alongside his role as president, Jokowi was in the Ukrainian capital in his capacity as chair of the Group of 20 largest economies and as one of the six world leaders the United Nations has appointed as “champions” of its Global Crisis Response Group, formed to address the threat of hunger and destitution posed by the war.

Jokowi arrived at Kyiv Central Station on Wednesday morning, having crossed into the war zone overland from Poland on a special sleeper train provided by the government of Ukraine for visiting world leaders.

On his first stop, Jokowi surveyed the grounds of the Lipky apartment complex in Irpin, a small town on the outskirts of the capital that had been the site of intense fighting. The city was badly shelled by Russian artillery but Ukrainian forces were able to drive away the aggressors.

Accompanied by Irpin Mayor Alexander Grigorovich Markushin, Jokowi said it was “very sad” to see the devastation there.

“We hope there will be no more cities in Ukraine that get damaged by the war,” Jokowi said during the site visit.

The presidential entourage also visited the Ukrainian Centre of Endocrine Surgery, Endocrine Organs and Tissue Transplantation, where the First Lady delivered humanitarian aid to the hospital and the patients there.

“In addition to the symbolic delivery of humanitarian aid by the First Lady, the government has also offered support through the Ukrainian Red Cross, as well as a commitment to help reconstruct hospitals ravaged by war,” Retno said.

Ahead of the talks, Zelenskyy posted a video on social media of him greeting Jokowi.

He said in his post that he was “grateful that in this difficult time for our state, we feel the support of your people and country”.

In the evening, Jokowi was due to return to Poland by train before continuing onward to Russia.

A global food crisis fuelled by climate shocks and the Covid-19 pandemic has been exacerbated by Russia’s invasion of Ukraine, which has driven up prices of food, fuel and fertiliser, the UN has said.

The complete halt in Ukrainian exports due to a Russian blockade has contributed to surging prices and put millions of people around the world at risk of starvation. — The Jakarta Post/ANN 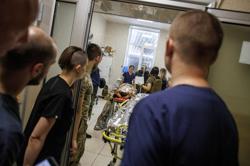