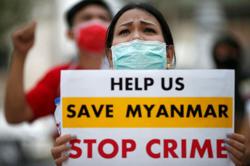 Cambodian Deputy Prime Minister and Special Envoy of the Asean Prak Sokhonn urged Myanmar to "exercise compassion and facilitate the return of Suu Kyi to the home where she was originally detained, in consideration of her fragile health and well-being" - AP

PHNOM PENH, June 28, 2022 (AFP): A regional envoy tasked with facilitating talks between Myanmar's junta and its opponents called on Monday night (June 27) for deposed leader Aung San Suu Kyi to be returned to house arrest from solitary confinement, ahead of his second visit to the country.

The former leader was transferred from house arrested to solitary confinement in prison last week, prompting concern and condemnation from the United Nations and international rights groups.

Special Asean envoy and Cambodian Foreign Minister Prak Sokhonn urged Myanmar to "exercise compassion and facilitate the return of Daw Aung San Suu Kyi to the home where she was originally detained, in consideration of her fragile health and well-being".

"We all share the view that a peaceful national reconciliation cannot be expected when one party to the conflict is taken out of the resolution equation," he added in a statement.

The foreign minister will make his second trip to Myanmar from Wednesday, a Cambodian foreign ministry spokesman confirmed to AFP late Monday without elaborating.

Prak Sokhonn last travelled to the South-East Asian nation in March, meeting with junta chief Min Aung Hlaing in an attempt to kickstart stalled dialogue between the military and its opponents.

Myanmar remains isolated on the international stage, with Cambodia's leader Hun Sen the only foreign head of state to visit since the putsch.

More than 2,000 people have been killed in a military crackdown on dissent since the coup, according to a local monitoring group. - AFP