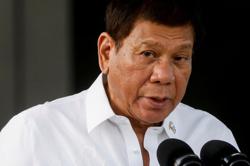 Philippine President Rodrigo Duterte has argued that all those killed were drug dealers who resisted arrest. - AFP

MANILA, June 26 (Reuters): Philippine President Rodrigo Duterte's office said on Saturday (June 25) it was "exasperated" with International Criminal Court Prosecutor Karim Khan and his plan to resume an investigation into killings during the government's crackdown on drugs.

Khan said on Friday that a deferral of the ICC's probe sought by Manila was not warranted and the probe should recommence as quickly as possible.

Presidential spokesman Martin Andanar said in a statement that the Duterte administration has undertaken "investigations of all deaths that have arisen from lawful drug enforcement operations" and the ICC should let the government's efforts run their course.

Last September ICC judges approved an investigation into the campaign in which thousands of suspected drug peddlers have died. Activists say many have been executed by law enforcement agencies with the tacit backing of the president. The ICC suspended the investigation in November at Manila's request.

The government, whose drug war death tally runs through May 2022, officially acknowledges 6,252 deaths.

Duterte, whose six-year rule ends on June 30, has defended the police and argued that all those killed were drug dealers who resisted arrest. He has publicly said police could kill if they believed they were in danger and he would pardon any who end up in prison.

Maria Elena Vignoli, senior international justice counsel at Human Rights Watch, said Khan's request to resume the investigation into alleged crimes against humanity during the drugs war "is a booster shot for accountability."

"The government has not been serious about justice for these crimes while the victims' families grieve without redress and those responsible face no consequences," Vignoli said in a statement. - Reuters