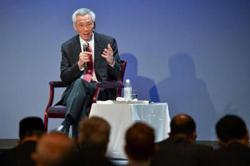 Singapore's Prime Minister Lee Hsien Loong walking on stage to take his seat at the opening ceremony of the Commonwealth Heads of Government Meeting at Kigali Convention Centre in Kigali, on June 24, 2022. Leaders of Commonwealth countries meet every two years for the Commonwealth Heads of Government Meeting (CHOGM), hosted by different member countries on a rotating basis. Since 1971, a total of 24 meetings have been held, with the most recent being in the UK in 2018. - AFP

SINGAPORE, June 25 (The Straits Times/ANN): There is a pressing need for the international community to deepen cooperation ahead of the next pandemic, Prime Minister Lee Hsien Loong told his counterparts from more than 50 nations late on Friday (June 24).

This includes working together to raise public health preparedness and response capabilities at the country level, PM Lee said during the Commonwealth Heads of Government Meeting held in Kigali, Rwanda.

He noted how Covid-19 has highlighted gaps in how the world responds to such global health challenges, from tracking the spread of the virus to providing support to the developing world.

"There is much more that we need to do together to improve our pandemic preparedness, including the reform of the World Health Organisation - amongst others, to develop an effective international surveillance system to detect the emergence and spread of new pathogens and viruses," he said.

PM Lee noted that in many developing countries, people are still not sufficiently vaccinated against the coronavirus.

"Logistical constraints and challenges in public health responses have made it difficult for these countries to actually deliver shots into arms," he said.

He acknowledged that resolving such issues takes years of patient effort, but stressed that work has to begin now.

"We must therefore start now, to build capacity, and get ourselves better prepared for the next pandemic. This is an important area for international cooperation," he said.

While the situation appears to be more stable, the crisis is not over, he stressed.

He held up two multilateral efforts that he said closed some gaps in the global response to the current pandemic.

First is the Covax initiative, which brings together governments and manufacturers to provide greater access to vaccines for developing countries.

Second is the Group of 20 (G-20) High-Level Independent Panel to improve financing of pandemic preparedness and response, which PM Lee said has catalysed broad recognition of the need for more proactive and effective global governance.

While Covid-19 has exposed the weakness of global supply chains and shaken countries' confidence in globalisation, PM Lee cautioned against protectionism and economic policies that lead to greater economic fragmentation that leaves everyone worse off.

He said that for a time, supplies of items like personal protective equipment, Covid-19 tests and even vaccines were disrupted. Some governments intervened to override private contracts and the normal operation of the free market when faced with an emergency, he added.

This meant that suppliers could not fulfil their promised deliveries - an experience which PM Lee said has shaken countries’ confidence in globalisation.

“Countries are now emphasising self-sufficiency, moving from just-in-time production to just-in-case precautions. Such a response is understandable, but we must be very careful not to take it to extremes, or to become protectionist,” he said.

It is impossible for any country to produce everything it needs by itself, and PM Lee warned how excessive “on-shoring” or “friend-shoring” - which refers to trade with only countries that have similar values or institutions - could result in economic fragmentation.

“We should not abandon the pursuit of win-win economic cooperation and inter-dependence,” he said. “Instead, we must work towards a more resilient form of globalisation.” -- The Straits Times/ANN