During the regular press briefing held in Hanoi, Hằng said that on June 17, the People's Court of Hanoi opened a first-instance trial and had subsequently sentenced the 46-year-old Ngụy Thị Khanh to 24 months in prison for tax evasion under Article 200 of the Penal Code.

She was arrested earlier in February by the Hanoi's police.

The investigation and trial process were conducted in accordance with the provisions of law, Hằng said, adding that the trial was held in public and the defendant’s rights were fully guaranteed as prescribed by law.

“Vietnam resolutely combats and strictly punishes in accordance with the law, ensuring the rule of law in the country. All citizens are equal before the law,” the spokesperson noted.

Vietnam has implemented awareness campaigns and education measures to gradually raise citizens' awareness and spirit of law abidance, contributing to the building of the rule of law in Vietnam.

“It is also necessary to reaffirm that Vietnam has always made a serious and strong commitment to environmental protection, climate change response, green and sustainable development. This has been clearly stated in many legal documents, guidelines and policies of Vietnam,” Hang stressed, dismissing the notion that the arrest will derail Vietnam's transition to clean energy.

She noted that at the UN Climate Change Conference (COP26) held in UK’s Glasgow last year, Vietnamese Prime Minister Phạm Minh Chính delivered a speech affirming Vietnam’s commitment to achieving sustainable development, net zero emissions by 2050, a 30 per cent reduction in greenhouse gas methane by 2030, and the country has also participated in the COP26 Global Coal to Clean Power Transition Statement and the Glasgow Leaders’ Declaration on Forests and Land Use.

According to the spokesperson, Vietnam is taking comprehensive measures in the field of energy transition, shifting the country’s growth model towards a green and circular economy.

The Government of Vietnam regularly consults and collects feedback and opinions from scientists, non-governmental organisations and international partners in the development of policies and laws on environment and climate change issues, Hang said.

“Organisations that support environmental protection and green development activities in Vietnam have participated and made contributions and their contributions are recognised,” the spokesperson remarked.

“As I mentioned above, Ngụy Thi Khanh was investigated and prosecuted for economic crimes, specifically, the violation of the legal provisions on tax and she has admitted her actions.

"The speculation that Ngụy Thị Khanh is being criminally handled for her activities and opinions related to climate change are baseless and do not reflect the nature of the case,” the foreign spokesperson stated. 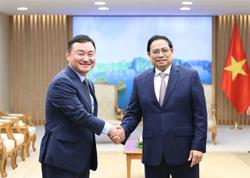