SINGAPORE (The Straits Times/Asia News Network): A police investigation officer (IO) handling a case involving a teenager’s suicide attempt ended up harassing the girl by sending her multiple text messages, including several inappropriate ones about her body.

The court heard that Leow Jin Jie, now 33, also policed multiple aspects of the 19-year-old girl’s life, including her social activities, and had repeatedly pestered her to meet him.

On Friday (June 24), he was sentenced to 20 days’ jail after admitting to a harassment charge.

Deputy Public Prosecutor Yvonne Poon told the court that the victim had just undergone an abortion and had been diagnosed with major depressive disorder with borderline personality traits.

The prosecutor also said the teenager was extremely vulnerable due to her mental and emotional conditions.

She added: “The accused was well aware of all these factors... Despite knowing, in excruciating detail, that the victim was highly susceptible in multiple aspects... the accused saw fit to use the victim as a sort of personal experiment for him to see if he ‘still had value with women’.

“He patently thought nothing of toying with her mental and physical safety.”

The court heard that the victim had multiple self-harm episodes since July 23, 2017.

On Sept 21 that year, her father found her injured in her bedroom and called the police.

The matter was then classified as a case of attempted suicide and Leow was assigned to it as an IO.

As part of investigations, he had to record a statement from her and went to her home on Sept 27 that year to do so. After that, they exchanged phone numbers.

Leow started to message her through WhatsApp the next day.

According to court documents, Leow started out by asking about her well-being. He later commented on her body and told her: “(Don’t) be naughty... (don’t) make me angry.”

After that, he messaged her again and asked if she wanted to meet him. He also proceeded to give her relationship-related advice.

DPP Poon told the court: “(The victim) felt harassed as he was always checking on her, intimidated as he said he would get angry, and also felt like he was trying to control her by saying ‘good girl’.”

On one occasion, Leow invited the victim to his home. He also told the teenager that he would not rape her as he had a job.

Besides the messages, there was another incident in mid-October 2017 when the victim went to Ng Teng Fong General Hospital for a check-up.

Annoyed by Leow’s messages, she sent a text message, saying she had been hospitalised.

On Oct 15, 2017, Leow came to the hospital to conduct investigations on an unrelated coroner’s inquiry and informed the victim that he would wait for her downstairs.

The teenager did not reply and later went downstairs for a smoke, accompanied by her mother.

DPP Poon said: “Though the victim did not see the accused, she felt scared and harassed. Her mother noticed that the victim was very shocked, but did not understand why.

“It was only after they had both walked away from the smoking corner that the victim told her mother about the accused and what he had been doing. Unable to tolerate the accused any longer, the victim deleted his texts and blocked his number.”

The matter finally came to light when the teenager was involved in another suicide attempt on Nov 19, 2019.

When another officer visited her in hospital, her mother asked for a female IO to handle the case as Leow had sent the victim inappropriate messages.

The mother was then advised to lodge a police report against Leow and she did so on Nov 21 that year.

On Friday, DPP Poon urged the court to sentence Leow to between 20 and 30 days’ jail, stressing that he had abused his powers and had targeted a “profoundly vulnerable victim”.

For harassment, an offender can be jailed for up to a year and fined up to $5,000. 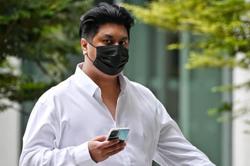