Seventeen political parties contested in the polls for the 11,622 positions of commune councilors in 1,652 communes across the South-East Asian nation for the next five years.

NEC's chairman Prach Chan said the voter turnout was 7.39 million, or 80.3 per cent of the 9.2 million registered voters.

"It was a successful election with a peaceful atmosphere," he said.

"Security, safety and public order were well maintained, and no incidents or acts of violence were reported."

The commune polls are seen as a test for the popularity of political parties ahead of the general elections in July 2023. 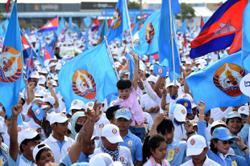